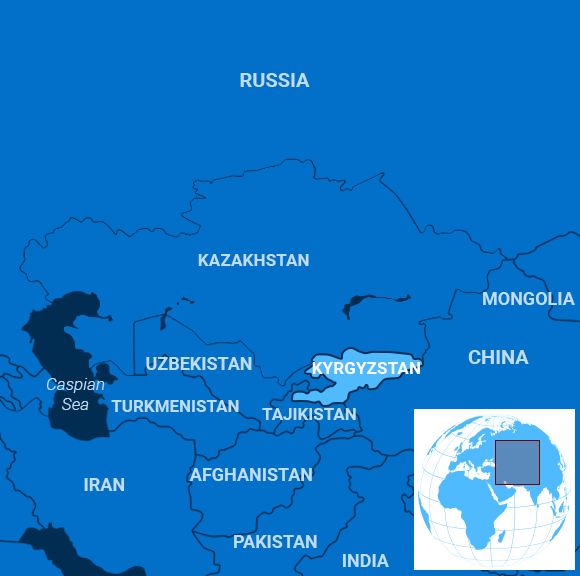 In early August, when security forces descended on the home of Almazbek Atambayev to detain him for questioning in a corruption case, the former president of Kyrgyzstan grabbed his rifle.

Atambayev, 62, viewed the investigation as an unfair political attack, the New York Times explained. He was president from 2011 to 2017. He supported the rise of his protégé and successor, current President Sooronbai Jeenbekov, thinking it would help him retain influence in the state apparatus. But recently Jeenbekov has been cutting Atambayev’s allies from the cabinet and other public positions. In June, lawmakers revoked Atambayev’s immunity as a former president, too.

His supporters swarmed his village on the outskirts of Bishkek, the capital of the ex-Soviet republic in Central Asia, to prevent security forces from rousting him.

In the scuffles that ensued, prosecutors claim Atambayev shot and killed a member of the special forces, the sole fatality in a clash that also injured scores of soldiers and civilians, reported Reuters. Atambayev, who was arrested in a second raid the following day, said he was only firing warning shots. Officials also accused him of plotting a coup, the BBC noted.

Kyrgyzstan endured two violent revolts that unseated presidents in 2005 and 2010, but it has since been an island of stability in the region. Though politically close to Moscow, the country hosted an American air base for 13 years after the September 11 terror attacks, for instance, National Public Radio wrote.

But the country is no longer so stable, and more turbulence is on the way.

Atambayev was attempting to retain too much power, argued German Institute for International and Security Affairs expert Sebastian Schiek, in a Deutschlandradio analysis. Now others will seek to fill the power vacuum he’s leaving behind.

As if on cue, former presidential candidate Omurbek Babanov recently returned to the country from self-imposed exile in Russia in a self-described bid to “ease tensions.”

Babanov had come in second in the 2017 election. Many viewed his run as the best alternative to the rivalry between Jeenbekov and Atambayev. But soon after the new president assumed office, Babanov faced charges of inciting ethnic tensions at political rallies and – like Atambayev – plotting a violent power grab. He fled.

Today his reappearance could be a canny political move to present his Respublika Party and himself as the next best option for the country as voters prepare for parliamentary elections next year, wrote Eurasianet.

That vote promises to be turbulent.

German Chancellor Angela Merkel said Wednesday that an alternative to the so-called “Irish backstop” could be found in 30 days, undermining repeated European Union statements that the terms of the British withdrawal from the bloc are not open for renegotiations.

Speaking at a news conference alongside British Prime Minister Boris Johnson in Berlin, Merkel said the UK would have to come up with a workable alternative, the BBC reported.

“The backstop has always been a fallback option until this issue is solved,” Merkel said. “It was said we will probably find a solution in two years. But we could also find one in the next 30 days, why not?”

Johnson said he was “more than happy” with the “blistering timetable,” but it was not long before French President Emmanuel Macron reiterated the longstanding EU position, saying, “Renegotiation of the terms currently proposed by the British is not an option that exists, and that has always been made clear by [EU] President Tusk.”

Johnson is slated to meet Macron Thursday – where he’ll presumably attempt to change the French leader’s mind – before the G7 summit on Saturday.

Taking a page from the US playbook, Beijing said it would sanction any company involved in the planned $8 billion sale of 66 Lockheed Martin F-16V fighter jets to Taiwan – potentially adding a new wrinkle to the US-China trade war.

“China will take all necessary measures to safeguard its interests, including the imposition of sanctions against the American companies that participate in this arms sale to Taiwan,” Chinese Foreign Ministry spokesman Geng Shuang said Wednesday, according to the Wall Street Journal.

China considers Taiwan a renegade province, though in practical terms it operates as an independent nation. The US has traditionally maintained diplomatic relations with Beijing and not with Taipei under the so-called “One-China policy” – though it has also continued arms sales to the island.

As Beijing strives to turn voters against Taiwanese President Tsai Ing-wen, however, the latest arms sale has been seen as “an act of political provocation,” given Washington’s historical reluctance to sell cutting-edge hardware to Taipei, said Shen Dingli, an international-relations professor in Shanghai.

Uruguay’s President Tabaré Vázquez revealed Tuesday that he has been diagnosed with lung cancer and said he will have more information after undergoing additional tests.

“In a tomographic study, a right pulmonary nodule was found, with very clear characteristics that it could be malignant,” Vázquez said, according to the Associated Press. The 79-year-old’s present term expires in March 2020. An oncologist by training, he pushed Uruguay to adopt some of the strictest regulations on tobacco in the world, the agency noted.

The announcement prompted expressions of support and sympathy from various movements and political parties of Uruguay and Latin America, including the presidential candidate for the opposition National Party, Luis Alberto Lacalle, Prensa Latina reported.

Vázquez said he would undergo any necessary medical treatment in his home country, as Uruguay has “a medical body of excellence and the best technology,” the agency said.

Vazquez led his left-wing Frente Amplio party to power in 2005, following two decades of conservative governments in Uruguay. He served as president from 2005 to 2010 and was elected for another five-year term in 2015, Reuters reported.

Artists and writers have depicted Cleopatra as an uncontested beauty who coated the sails of her boat with such a strong fragrance that it could be smelled from afar.

Today, archaeologists are still arguing about whether the last queen of Egypt had drop-dead gorgeous looks, but they might have finally discovered how she smelled, according to Atlas Obscura.

A team of researchers recently recreated a perfume they believe might have been worn by the famous queen using residue from an ancient amphora.

“This was the Chanel No. 5 of ancient Egypt,” said archaeologist Robert Littman. “It was the most prized perfume of the ancient world.”

The team first analyzed the chemical components of the residue and used ancient Greek recipes to recreate the famous scent.

The ancient perfume contains myrrh, a natural resin, as well as traces of cardamom, green olive oil and cinnamon. It’s quite strong and musky, but “very pleasant,” according to Littman.

Perfumes were important for rituals in ancient Egypt and the remade scent can give an insight into perfume-making in the ancient kingdom.

But it’s unclear if the recreated scent is exactly the “brand” Cleopatra wore, according to natural perfumer Mandy Aftel.

“People have tried to recreate her perfume, but I don’t think anybody knows for sure what she used,” she said.