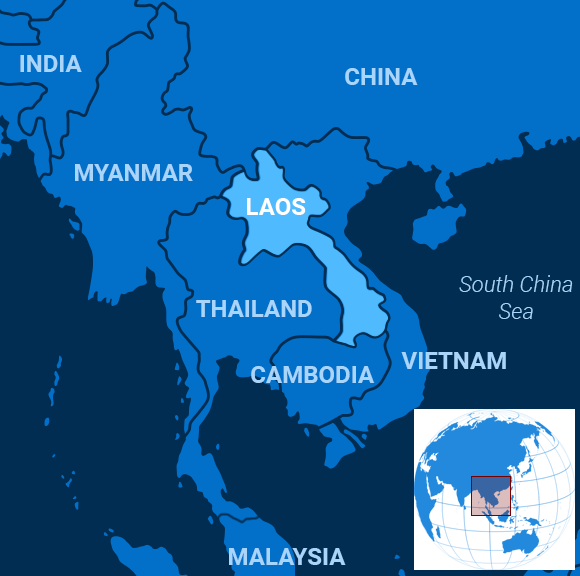 Laos is straggling into the 21st century. But it has demons from the distant and not-so-distant past that it continues to grapple with.

For example, deformities, disabilities and other medical ailments afflict many children born along the country’s eastern border with Vietnam. The sicknesses appeared after the end of the Vietnam War, when American planes bombed regions of Laos and Cambodia with a powder that irritated the eyes and killed plants.

“This powder was likely Agent Orange, the US’s favored dioxin-laced Vietnam War defoliant,” wrote the Atlantic. The chemical can cause cancer and heart disease in people directly exposed, the magazine added, “and an array of birth defects in their descendants.”

Laotians are also clearing around 80 million unexploded bombs dropped during the Vietnam War era in one of the largest CIA operations in history, a Pulitzer Fellow explained in a documentary. Since then, more than 20,000 people have died when unexploded bombs finally went off, according to the Mines Advisory Group.

The country’s leaders have not always treated their people well, either.

The communist Laotian government has a dismal human rights record. Human Rights Watch recently appealed to the Australian government to press Laos on loosening restrictions on speech and assembly and curbing violence against women, for example.

But the crisis that best shows the wanton neglect for public safety in the landlocked Southeast Asian country was the collapse of a dam at the Xepian-Xe Nam Noy hydropower complex a year ago. As Nikkei Asian Review recalled, the collapse unleashed a flood that killed at least 71 people and displaced thousands.

Many victims are still waiting for adequate compensation from foreign corporations that insured the project, wrote the Diplomat. Other Laotians are fighting big companies to reclaim the land they say was stolen from them in the relentless construction of infrastructure in the impoverished country.

Among the displaced are families who lost their homes to the building of the China-Laos railway. “They gave us only a little bit more than 100 million kip [less than $12,000], but with just 100 million, we can’t build a new home,” a villager in the Hin Heub district told Radio Free Asia.

The railway is part of China’s great worldwide push for better transport with European, African and Middle Eastern markets, a sign of how Laos is becoming stitched into the global economy, Xinhua reported.

Even so, NBC News carried a tearjerker of a story about a deceased American pilot whose remains recently returned home from Laos. The nature of his mission into Laos was not clear. But it was the late pilot’s son, now a captain with Southwest Airlines, who flew the remains home to the same airport where the son, then 5, said goodbye to his father in 1967.

As bygones become bygones, Laos might someday be able to look forward more easily to the future. But that day still remains far away.

French President Emmanuel Macron and Russian President Vladimir Putin pledged to try to revive the Ukraine peace talks and improve Moscow’s relations with Europe at a meeting of the two leaders in France on Monday.

However, they butted heads over other issues, such as the recent Russian crackdown on protesters and Moscow’s role in the recent Syrian government offensive in rebel-controlled Idlib, the Associated Press reported.

The two leaders also agreed to work toward easing tensions between Iran and the United States.

It’s not clear how useful these expressions of alignment are, of course. But France was instrumental in the Parliamentary Assembly of the Council of Europe’s move to restore the credentials of Russia’s delegation in June, five years after it was stripped of voting rights following Crimea’s annexation. And Russia, along with Britain, Germany and China, is an important player in the Iran drama, since it too is still part of the 2015 nuclear pact at the root of the Tehran-Washington dispute.

Two days after Sudan celebrated the finalization of a long-percolating power-sharing deal between military and civilian leaders pending elections three years down the road, the trial of longtime dictator Omar al-Bashir began Monday in Khartoum.

Though the International Criminal Court has long sought to hold him responsible for the Darfur genocide, he is facing trial on more banal charges of corruption, the New York Times reported. On Monday, a senior police officer testified that Bashir had told investigators he received $90 million from Saudi Arabia — which for many years helped to prop up his regime.

Bashir was confined to a cage for the two-hour hearing, symbolizing the sweeping changes that have come to Sudan since months of protests finally resulted in his ouster in April. However, most Sudanese say the country will not fully slough off the evils of his reign until he faces charges for his most serious crimes.

Since many of the generals set to play a role in the new government were also part of the Darfur campaign – which killed as many as 300,000 people – that’s not likely anytime soon.

The Federal Electricity Commission, or CFE, has pushed the pipeline’s builders, along with two other private operators, into arbitration to try to recover $900 million related to delays in the South Texas pipeline and another $2.7 billion related to six other pipelines, the Wall Street Journal reported.

Like the president’s decision to scrap Mexico City’s partially completed airport shortly after he took office, however, the move has been perceived as anti-business. López Obrador has already rolled back key parts of the privatization of the energy sector that began under his predecessor, former President Enrique Peña Nieto.

Meanwhile, apart from compensation for delays, CFE also wants to reduce the capacity and usage rates it is charged under the deals with the pipeline companies, which like the airport fiasco adds to uncertainty over whether the López Obrador government will honor contracts.

The fairy tale “Snow White” may have been based on a true story, with the real character being buried somewhere in the city of Bamberg, Germany.

Museum officials in Bamberg recently got their hands on the long-lost gravestone of Maria Sophia von Erthal, whose life may have inspired the Brothers Grimm, Sky News reported.

The gravestone got lost in 1804 when the church where von Erthal was buried was demolished. It resurfaced in the 1970s during the construction of a clinic and was kept by a local family until recently.

Although no glass coffin was found and there’s no evidence of seven dwarfs, von Erthal’s story does have some parallels with the fabled beauty.

Von Erthal was born in Lohr am Main, also known as “Snow White City,” a town 60 miles from Bamberg. Her mother died when she was young and her father – who owned a mirror factory – remarried a woman who tried to push aside her stepdaughter and favor her own children.

Unfortunately, the real Snow White didn’t have a happy ending: Von Erthal never married, never had seven small companions, went blind and died at the age of 71 in Bamberg.

A few decades later, Lohr am Main townspeople say, the Brothers Grimm retold her story, embellished with elements of German folklore, and the tale was later popularized by the 1937 Walt Disney movie.