Good morning, today is Monday August 19th, 2019, and this is your “World In 2 Minutes” from DailyChatter. 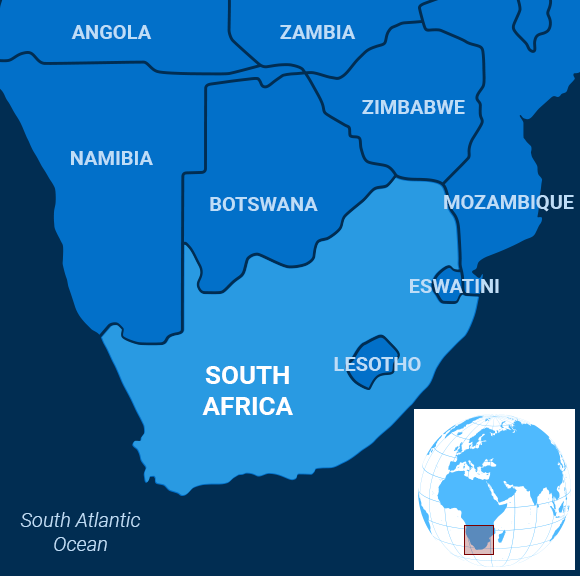 A History of Taking

Demonstrators sporting socialist slogans took to the streets of South Africa last month. “Yes to land expropriation without compensation!” read one demonstrator’s sign in a photo with this BBC article.

The protesters’ demands reflected frustration with the lack of progress in redistributing property since the end of apartheid, the white supremacist system of segregation that prevailed in South Africa through 1994.

Land reform is a huge issue in South Africa. One set of statistics says that whites represent 9 percent of the country’s population but hold 72 percent of the land that is owned by individuals. Agence France-Presse provided some context, breaking down the history and complicated claims on land that might have been seized under a colonial regime and then passed through many hands over the years.

The country’s first black president, Nelson Mandela, had promised to redistribute some wrongfully taken land to citizens. But few such transfers have actually happened.

President Cyril Ramaphosa recently empaneled a commission to investigate the issue. The panel recommended seizing land, in some cases, without paying the owner. Those cases include “abandoned land” and “land held purely for speculative purposes,” Radio France Internationale explained.

RFI noted that Ramaphosa appointed the panel under pressure from the Economic Freedom Fighters, a far-left political party that has been attacking the slow progress of the ruling African National Congress.

A majority on the panel also recommended a constitutional amendment to clarify that the grounds for seizures without compensation must be limited. They certainly had Zimbabwe on their minds. Former Zimbabwean President Robert Mugabe tried expropriation but set in motion a downward economic spiral that eventually led his allies to oust him from office.

Panel member Dan Kriek, president of a group representing commercial farmers, argued against a constitutional change. “I do believe that if we go the way of amending the constitution, we will do much harm to our economy,” he said. “We will not get foreign investment. We will see inward and external investment drying up as the levels of uncertainty will increase.”

Analysts writing for the Daily Maverick were skeptical about whether Ramaphosa and his allies could pull off even unambitious land reforms, with or without taking someone’s homestead on the veldt. Corruption riddles South Africa’s cash-starved government.

South African society is straining. Gun-related crime is surging in the cultural capital of Cape Town, swamping emergency rooms, for example, wrote the Independent Online, a local news outlet in the city.

Governing with justice requires a difficult balancing act between pressing needs. Unfortunately, time is running out as people lose patience.

The local affiliate of Islamic State claimed responsibility for a suicide bombing at a wedding in Kabul that killed at least 63 people over the weekend, marking the deadliest attack in the Afghan capital this year amid ongoing peace talks between the US and Taliban.

The bomber detonated a suicide vest on Saturday while standing amid a dancing, clapping crowd, the Associated Press reported, raising questions about a possible further breakdown in security following the withdrawal of US troops under the likely peace deal.

The Taliban condemned the attack as “forbidden and unjustifiable,” but the rise of Islamic State in Afghanistan illustrates that cutting a deal with one long-time foe may simply make way for the emergence of another.

The attack apparently targeted Afghanistan’s minority Shiite Hazara community, though the wedding guests included both Shiites and Sunnis, according to the event hall where the blast occurred.

Islamic State declared war on Afghanistan’s Shiites nearly two years ago and has claimed responsibility for numerous attacks targeting them in the past, the agency noted.

Dujovne said in a statement that Macri’s economic team needed “significant renewal,” the BBC reported, noting that the peso plunged 20 percent against the dollar following Macri’s defeat. “I believe my resignation is in keeping with my place in a government that listens to the people and acts accordingly,” Dujovne said.

For his part, Macri has already unveiled income tax cuts, boosted welfare subsidies and frozen fuel prices for 90 days to woo back voters disillusioned with his austerity program.

Meanwhile, opposition candidate Alberto Fernandez – Macri’s nominal opponent alongside former President Cristina Fernández de Kirchner, who is running as vice-president – said Sunday he would seek to renegotiate the terms of the $57 billion stand-by agreement that Macri inked with the International Monetary Fund in 2018.

Italy’s 5-Star Movement effectively ruled out salvaging the ruling coalition with the far-right League party of Matteo Salvini on Sunday, saying the increasingly popular right-wing leader is “no longer a credible interlocutor.”

The top leaders of the 5-Star Movement issued the statement after a meeting to discuss the strategy the party will take after Prime Minister Giuseppe Conte addresses the Senate on Tuesday, Reuters reported.

It was Salvini who first suggested that the 5-Star Movement alliance was no longer workable and called for fresh elections in an effort to secure the prime minister’s seat for himself, based on his rising popularity. Then 5-Star and the opposition Democratic Party blocked his no-confidence motion and began negotiating to form a coalition of their own. As a result, Salvini waffled and indicated he’d be willing to bury the hatchet, perhaps with nothing more dramatic than a cabinet reshuffle.

The 5-Star statement, however, once again suggests that fresh elections are now virtually inevitable unless the 5-Star Movement and the Democrats can cut a coalition deal.

Herring gulls that hang out around the seaside don’t like to wait for a meal – they often snatch food from unsuspecting beachgoers.

In the United Kingdom, authorities have used several methods to control the birds, including plastic owls and roof fixtures to prevent nesting.

Scientists, however, argue that there’s a cheaper method, NPR reported.

British researchers noted that a simple stare-down would discourage the pesky gulls from stealing.

In a recent study, they planted a bag of potato wedges on the ground as bait. Once a gull got close, an experimenter would turn and make eye contact.

Only 36 percent of the birds dared to steal the bait – the rest either fled or didn’t come any closer.

“This demonstrates that gulls use behavioral cues from humans when making foraging decisions in urban environments, and that they find human gaze aversive,” the researchers wrote in their study.

Aside from being cost-effective, the simple alternative might be better than carrying water guns or calling for a cull.

The latter idea might not be advisable since gull populations in the UK have been in a steep decline for decades.

Sometimes the hardest problems have the simplest solutions.