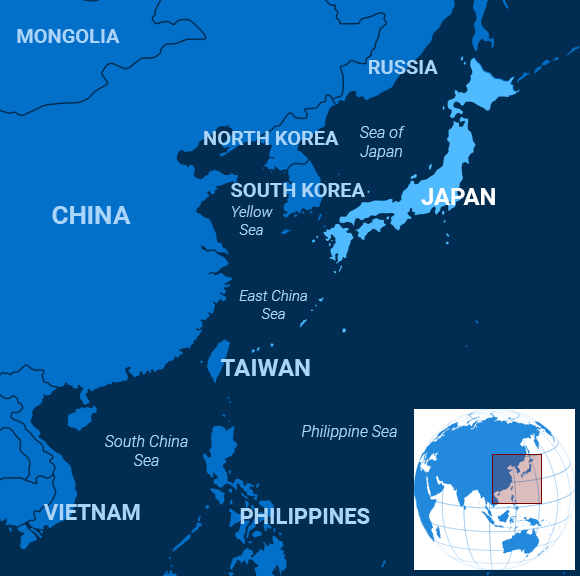 A trade war is threatening the peace and prosperity of Asia.

This time, however, neither China nor US President Donald Trump is to blame.

Instead, the commercial contretemps is pitting Japan against South Korea.

The dispute started over South Korean demands related to Japan’s occupation of the Korean peninsula before and during World War II, but has transformed into a crisis over smartphone parts and other electronics, the Financial Times explained in a video.

Japan ruled the Korean peninsula between 1910 and 1945. Japanese leaders have long maintained that a 1965 agreement with South Korea settled issues related to their country’s dark past, which included forcing Korean women to become sex workers for imperial Japanese troops and forcing other Koreans to work as slave laborers for Japanese companies.

Japanese Prime Minister Shinzo Abe has since loosened the restrictions, wrote the Asia Times. South Korean leaders responded by shelving a proposal to erect barriers on exports to Japan.

But South Korean citizens are still angry. On the eve of the anniversary of Japan’s surrender in World War II, which South Koreans call National Liberation Day, thousands of South Koreans protested outside Japan’s embassy in Seoul and the city unveiled a new memorial to the so-called “comfort women” forced into prostitution by the occupying forces. Then on Thursday South Korean President Moon Jae-in said Seoul would “gladly join hands” if Tokyo is willing to choose “the path of dialogue and cooperation.”

The dispute could hurt American interests. Japan and South Korea are US allies that arguably are vital during Trump’s ongoing trade war with China and efforts to curb North Korea’s nuclear program. But South Korea has threatened to end intelligence sharing with Japan, Stars and Stripes reported.

“Our alliance system in the Far East needs constant attention,” wrote the National Review. “America and its allies must stick together.”

But the US has little leverage to fix the situation, reported the New York Times. Trump alienated Asian leaders by pulling the US out of the Trans-Pacific Partnership, a trade pact that his predecessor Barack Obama negotiated with regional leaders.

The American president’s trade war with China is also threatening to hurt Japan and South Korea, reported the Nikkei Asian Review. Currency fluctuations and other instability hurt their trade. American tariffs wind up costing them, too, because many items manufactured in China use Japanese and South Korean parts.

The machinery of the world economy is complicated and, most importantly, unforgiving.

The Grace 1 was captured on the grounds it was allegedly ferrying its 2.1 million barrels of crude oil to a Syrian refinery that was covered by a European Union embargo and other restrictions. Despite US objections, the British territory on Thursday opted to release the vessel after Iran provided assurances in writing that the cargo would not be delivered to that refinery, depriving Syrian President Bashar al-Assad of more than $140 million of crude oil, the Associated Press reported.

The move could potentially ease tensions between London and Tehran, which is still holding a British-flagged ship seized in retaliation.

However, Gibraltar Chief Minister Fabian Picardo said Washington could begin a new legal procedure for seizing the Grace 1, and it was not immediately clear if it would do so before the ship is able to leave Gibraltar, the agency said.

Italy’s anti-establishment 5 Star Movement and the mainstream Democrats are flirting with their own unlikely alliance to thwart the rise of a far-right government led by Matteo Salvini’s League.

Presently, the League’s partner in the ruling coalition government, 5 Star teamed up with the Democrats late Tuesday to temporarily stymie Salvini’s efforts to bring down the coalition and force fresh elections with a no-confidence vote, the Wall Street Journal reported. But the vote is now slated for Aug. 20, and whether the two parties can stave off the ever more popular Salvini remains in question, according to the Financial Times.

If Salvini succeeds in triggering fresh elections in October or November, he and the League’s right-wing allies are almost certain to win, ushering into power the first far-right leader in a major European Union country and paving the way for harsh immigration policies and tax cuts that violate EU rules on fiscal discipline.

To stop that from happening, 5 Star may well have to cobble together a different coalition, possibly with the Democrats, but the FT says the two rivals are presently far from that kind of long-term alliance.

A coalition of human rights groups said armed men kidnapped six Zimbabwean political activists from their homes and beat them up in an effort to quash a planned protest by the main opposition party on Friday.

The Zimbabwe Human Rights NGO Forum, a coalition of rights groups, said it suspected state security agents were behind the abductions, Reuters reported.

“Zimbabwe’s fundamental freedoms are once again in danger and this must be stopped before it gets out of control,” Jestina Mukoko, who chairs the forum, told reporters.

Friday’s protests have been called by the opposition Movement for Democratic Change (MDC), which still disputes the legitimacy of Emmerson Mnangagwa’s presidential election win last year. However, the specific issue they’re targeting is the dismal state of the economy.

Mnangagwa’s government blamed the incident on a “third force” comprising supporters of former leader Robert Mugabe, though it said police would conduct a full investigation.

The MDC has vowed that the protests will be peaceful, but the authorities fear a repeat of the violence that broke out in January over a steep hike in fuel prices.

There may well be life on the moon now, and humans are responsible for it.

Recently, the privately funded Israeli lander Beresheet released one of Earth’s hardiest creatures after accidentally crash-landing on the moon’s surface, the Guardian reported.

Scientists believe that thousands of tiny tardigrades – also known as water bears or moss piglets – are the only survivors of the incident since they are almost indestructible.

The microscopic eight-legged creatures can shrug off fatal conditions by turning into a dormant seed-like pod, which allows them to survive high temperatures, radiation and the vacuum of space – to name just a few calamities. To bring them back to life, just add water.

“Tardigrades can survive pressures that are comparable to those created when asteroids strike Earth, so a small crash like this is nothing to them,” according to tardigrade researcher Lukasz Kaczmarek.

In their dormant state, it appears that even the aging process stops – a trait with obvious implications for any future space colonization efforts.

“It may be that we can use this in the future if we plan missions to different planets, because we will need to be young when we get there,” Kaczmarek said.

Despite the tiny animals’ superhuman abilities, any sleeping survivors of Beresheet’s crash won’t be colonizing the moon. Earth’s satellite lacks the liquid water needed to reactivate them.