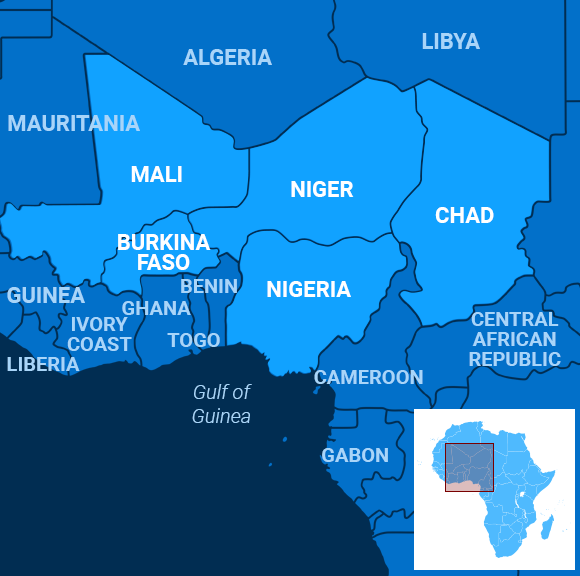 In 2017, jihadist militants ambushed a unit of American special forces in Niger. The Pentagon recently issued a report blaming junior officers for the incident that resulted in the deaths of four soldiers, the New York Times wrote.

Since then, however, the security situation has deteriorated not only in the impoverished, largely Muslim West African country, but also in neighboring Burkina Faso, Chad, Mali and Nigeria. Militants linked to al-Qaeda, Islamic State and other groups have been launching attacks throughout the region, echoing their international approach to destabilizing the Middle East, Niger President Mahamadou Issoufou noted recently.

Now, Niger could become the lynchpin in the fight against Islamic extremism in the Sahel region of western Africa, which Islamic State views as a potential replacement for its fallen “caliphate” in Iraq and Syria, the Economist reported.

“Niger’s ability to hold firm against jihadists will not only determine its own future stability; it will shape the future of militancy in the broader region and either deny or provide foreign forces the opportunity to use Niger as a stable base in their counterterrorism fight,” wrote Strator, a think tank, in a recent report.

“I propose an international coalition, like you see in Syria or Iraq, to fight terrorism in the Sahel and the Lake Chad basin,” Issoufou told Bloomberg. “When I say an international force, this also includes the US.”

The problem is, foreign troops are already fighting in the region. The US has deployed forces. France is fighting in Mali. Ivory Coast and Ghana have also bolstered their security, expecting tougher times ahead. It’s hard to see what else outsiders might do.

Analysts at the Center for Strategic and International Studies, another think tank, believe more troops might be necessary. But if the US and others opt to enlarge their militaries’ footprints in Niger and the Sahel, they’ll need to do a better job of curbing civilian casualties and boosting political processes that might weaken the militants in the first place, the center’s analysts wrote in a recent brief.

Those suggestions reflect the dire conditions in Niger and surrounding areas: Almost 10 million people in the region are “food insecure,” according to the United Nations. Around 2 million children are at risk of acute malnutrition.

Those projects are a start. They won’t take off, however, if fanatics are in control.

Germany’s economy shrank in the second quarter, prompting fears Europe’s export powerhouse will dip into recession as a result of the US-China trade war and an associated slowdown in China ­– which has also reported discouraging economic data.

Germany’s economy contracted 0.1 percent in the three months that ended June 30 compared with a year earlier, the Wall Street Journal reported, increasing pressure on the country to loosen its strict fiscal policy to stimulate domestic demand.

“We are in a weak growth phase but not yet in a recession, which we can avoid if we take necessary measures,” Germany’s minister of the economy, Peter Altmaier, said in a statement.

So far, the planned measures don’t appear to include a change in fiscal policy. Instead, Altmaier said Wednesday that Germany should slash corporate taxes and accelerate planned investments into digitization and future technologies.

The discouraging German numbers will also add to calls for the European Central Bank to launch a new stimulus package at its next policy meeting on Sept. 12, the Journal noted.

In a development that could hurt Prime Minister Justin Trudeau’s chances in the upcoming October elections, Canada’s independent ethics commissioner found Wednesday that he violated federal conflict of interest rules when he tried to influence a former minister in an alleged attempt to shield engineering firm SNC-Lavalin from a criminal trial.

Independent ethics commissioner Mario Dion said in a statement Wednesday that Trudeau “directly and through his senior officials” sought to “circumvent, undermine and ultimately attempt to discredit” former justice minister and attorney general Jody Wilson-Raybould in the case, the BBC reported. She was seeking to prosecute SNC-Lavalin on charges that its former executives paid bribes to win contracts in Libya under Muammar Gaddafi’s regime, which fell in 2011,

Earlier, Wilson-Raybould had said Trudeau and his staff spent months lobbying her to avoid taking the case to trial, arguing it would hurt the party and cost Canadians jobs.

Trudeau argued that he felt negotiating a deferred prosecution agreement instead of opting for criminal prosecution was in the public interest, but Dion called Trudeau’s actions “contrary to the constitutional principles of prosecutorial independence and the rule of law.”

The violence was the result of “a political fight, not terrorism,” the court ruled, according to Al Jazeera.

The defendants were acquitted of all charges, which included terrorism, criminal association, using force to damage government property, inciting unrest, possession of arms, obstruction of officials through intimidation and the gathering of more than 10 people to cause chaos.

The ruling follows the July dismissal of a parallel case in which four members of an anti-Thaksin group, the People’s Democratic Reform Committee, were charged with raising an insurrection in 2013 against the government led by Thaksin’s sister, Yingluck Shinawatra, that eventually served as the pretext for the military takeover in 2014.

In June, Parliament named the former general who held the title of prime minister under that military government, Prayuth Chan-ocha, to the post again following a controversial election.

Researcher Katerina Harvati and her team, who studied the two fossils, concluded that one of the crania, “Apidima 1,” actually belonged to an early modern human. That finding, if confirmed, might rewrite a chapter of human history.

“I couldn’t believe it at first, but all the analyses we conducted gave the same result,” said Harvati.

The team concluded Apidima 1 was 210,000 years old, which would make it the oldest modern human fossil found in Europe and challenge the generally accepted theory that Homo sapiens evolved in Africa and migrated to other continents only between 60,000 and 70,000 years ago.

Other researchers, however, are hesitant about accepting the Harvati team’s interpretation of Apidima 1. The fossil consists only of the back of a skull, they note. While the fragment has a rounded form typical of Homo sapiens, it lacks facial bones, teeth and other features that might confirm that interpretation.

If the fossil is a modern human, that might suggest a scenario in which Homo sapiens and Neanderthals vied for dominance in Greece.

“Perhaps one or more times, the two species replaced each other as the main hominin group present in this region,” paleoanthropologist Eric Delson wrote in Nature magazine.