Good morning, today is Monday August 12th, 2019, and this is your “World In 2 Minutes” from DailyChatter. 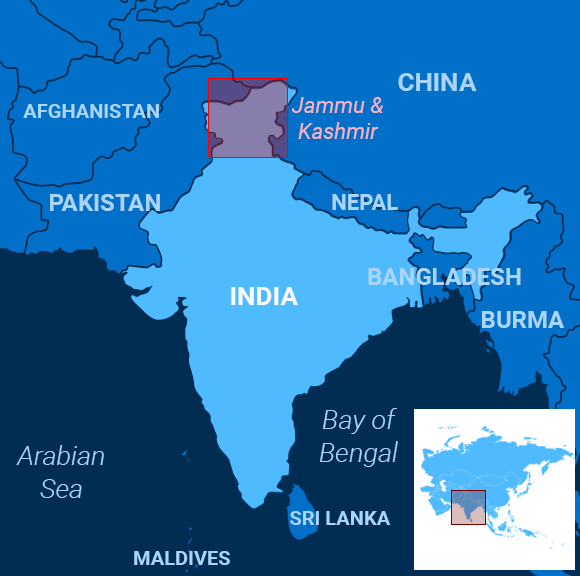 Conflicts over Kashmir have sparked multiple wars and ongoing skirmishes between India and Pakistan in the 20th century. Many now fear another is looming.

When the two countries won their independence from Britain in the middle of the last century, the many princely states that had been part of the British colony were allowed to decide if they wanted to join India or Pakistan. The Maharaja of Kashmir chose to remain independent. In the bloody turmoil of the partition of the two countries, however, pro-Pakistan forces took over much of western Kashmir, and India only agreed to come to the Maharaja’s aid if he acceded to India, which he did on Oct. 26, 1947. The accession prompted the first war between India and Pakistan and the division of Kashmir by the United Nations two years later.

Practically ever since, India’s so-called “Hindu nationalists” — whose principal ideologues envisioned India as a Hindu state, rather than a secular one — have been calling for their government to take a stronger hand in the Muslim-majority territory under India’s control. Many are also keen to see the so-called Kashmiri pundits, Hindu residents of Kashmir who fled during the height of militancy in the 1990s, return to the valley.

Now Indian Prime Minister Narendra Modi is trying to satisfy those voices. The Hindu nationalist politician recently announced an executive order to repeal Article 370 of the Indian constitution, the Hill reported. The move would rescind the autonomy granted to the state of Jammu and Kashmir and allow Indians from outside the region to buy land, settle there permanently and hold local public-sector jobs.

As the BBC explained, Modi is also dividing the state into two territories, one combining the Muslim-majority Kashmir and Hindu-majority Jammu regions, and the other sectioning off the Buddhist-majority Ladakh region, where India has a separate border dispute with China. The Hindu, an Indian newspaper, says the former will get a legislature, the latter none.

Though Modi explained the measure as an effort to combat terrorism, it’s a provocative development to say the least.

Writing in an op-ed in the Washington Post, Lafayette College historian Hafsa Kanjwal argued that Modi’s announcement was part of a “settler-colonial project” similar to Israel’s building settlements in Palestinian territories.

Others agreed that Modi is attempting to squeeze Muslim Kashmiris out of their historic lands.

“Non-Hindus, and in particular the Muslim minority, stand to lose out from this,” Michael Kugelman, an India expert at the Woodrow Wilson Center, told Vox. “The repeal of Article 370 is a big manifestation of Hindu nationalism, as it represents an effort to bring India’s only Muslim-majority region into the union of India so that the nation’s Hindu majority can invest, acquire land there, and so on.”

Many, including Modi, fear unrest. As the decision became law, the prime minister, who won re-election in March by a wide margin, sent in troops to keep the peace, cut Internet and phone lines, and detained Kashmiri leaders who might have raised objections to the change. And even amid the Internet blackout, reports have trickled out of dogged protests in the face of iron-fisted martial law.

“The Fifth of August is the blackest day of Indian democracy when its Parliament, like thieves, snatched away everything from the people of Jammu and Kashmir,” Mehbooba Mufti, a former chief minister of the state, said in a message she managed to get out before she was arrested, according to the New York Times.

For years, the US and Soviet Union avoided mutually assured destruction. India and Pakistan seem not to have paid attention to those lessons.

An ally of Yemen’s internationally recognized government in the ongoing civil war briefly captured the port of Aden from government troops over the weekend, suggesting all is not well with the Saudi and United Arab Emirates-backed coalition.

A UAE-backed separatist force called the Southern Transitional Council seized the country’s main port after four days of fighting in which around 70 people were killed, the Associated Press reported. However, they began withdrawing almost immediately Sunday, the agency said.

Though they’re allies in the fight against the Iran-backed Houthi rebels, the relationship is tense between the UAE-backed southern separatists and the Saudi-backed government of President Abed Rabbo Mansour Hadi – who has been based in Saudi Arabia for five years.

The current crisis was sparked by the killing of a separatist leader in a Houthi rocket attack, after which separatists attacked the presidential palace and one of the group’s leaders called for the overthrow of the government.

Efforts to negotiate a peace between the Houthis and the official government have been hard enough, but that now looks like one tricky piece of an even more complicated puzzle.

It’s no longer just about the city council elections, the Journal said. Now it’s about the country’s “chronic economic problems aggravated by Western sanctions,” as grocery store chains have introduced consumer loans so shoppers can feed their families.

“It’s like the genie is out of the bottle and people can finally express their frustrations,” said Denis Volkov, a sociologist at Moscow-based pollster Levada.

Norwegian police said Sunday that the man suspected of opening fire on worshippers at a mosque in Oslo had praised right-wing extremists including the leader of Norway under Nazi occupation online.

Other reports said he drew inspiration from the recent white extremist attacks in Christ Church, New Zealand, and El Paso, Texas. The shooting is being investigated as a possible act of terrorism, the authorities said.

The suspect, a Norwegian man in his 20s, faces murder charges for the killing of a woman found dead in his home and attempted murder charges for a shooting on Saturday at Al-Noor Islamic Center in Oslo in which one person sustained minor injuries, CNN reported.

According to USA Today, the woman found dead at the suspect’s home was his 17-year-old sister.

One of the worshippers, a 65-year-old man named Mohamed Rafiq, prevented further violence by tackling the shooter and pinning him to the ground. The carnage was also limited because more than a dozen worshippers had left the mosque a few minutes before the shooter arrived, leaving just three potential victims.

The attack came as Muslims around the world celebrated Eid Al Adha, the Festival of Sacrifice.

Named WASP-121b, the planet is so hot that heavy metals boil through its atmosphere and escape into space, Live Science reported.

The planet is classified as a “hot Jupiter.” It’s roughly the same size as the giant planet of our solar system, but it is 12 to 24 percent heavier.

In the past, astronomers have come across other hot Jupiters where extreme heat boils metals up into the atmosphere, but not beyond. Instead, the gassy metals become clouds. That’s not the case with WASP-121b.

The researchers explained in their study that the planet’s proximity to its star – which is hotter than our sun – makes it so hot that metals like iron and magnesium boil out into space.

“We see magnesium and iron gas so far away from the planet that they’re not gravitationally bound,” lead author David Sing said in a statement.

But that doesn’t mean that the planet is doing well, Sing added.

The gravity and heat of its star are stripping away its atmosphere and could rip the planet apart in the future.

That’s likely for Earth, too, but in about 5 billion years when the sun becomes a blazing red giant.