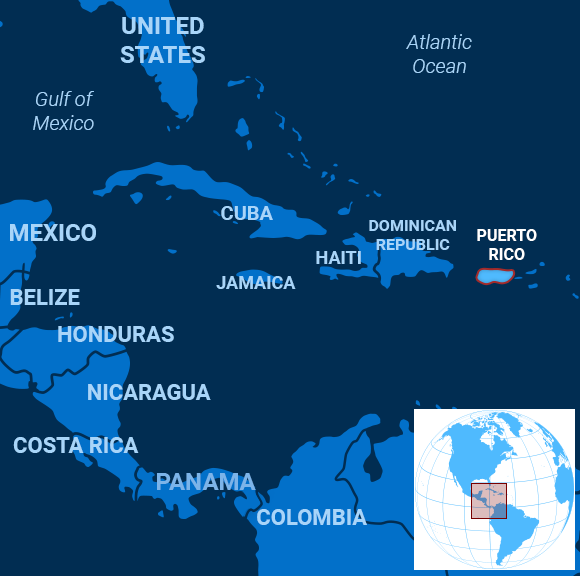 Puerto Rico was recently described as the world’s oldest colony.

Now it’s the latest place where the people are fed up with their leaders.

Recently, Puerto Ricans were banging pots and pans – a type of protest called a “cacerolazo,” after the word for a cooking pot – to register their disapproval of their governor Ricardo Rosselló. Rosselló was outed by investigative journalists as the author of sexist, homophobic, and violent comments – also joking about 2017’s Hurricane Maria’s victims – in almost 900 online chat messages, wrote Dominican author Rita Indiana in a Boston Globe op-ed.

The furor led Rosselló to announce he would resign on Aug. 2. He did.

The protests were about more than smutty language, though. The wealthy son of a former governor, Rosselló was living lavishly while facing corruption charges and widespread dissatisfaction over the island’s lackluster economy, corruption, and the poor preparedness and response to Hurricane Maria, the New York Times explained.

Zuheidy Ramos, 21, summed up the anger against politicians in an interview with CNN. “They are our employees, they are the people’s employees,” she said. “And they can’t do whatever they want with us. We put them there to represent us and they are doing us harm.”

Hurricane Maria killed almost 3,000 people. Indirectly, it took an even greater toll, Jesiely Martinez, a 38-year-old computer engineer and protester, told the Los Angeles Times. Martinez’s grandmother died from cancer that went undetected for too long because damaged roads and bridges made it difficult to get to a hospital. “I consider her death as caused by Maria,” said Martinez.

Residents aren’t upset only about Rosselló and Hurricane Maria.

Puerto Rico labors under a US law enacted in 2016 that established a financial oversight board to restructure the territory’s debt and oversee its taxing and spending. The board has pushed for austerity measures that are making life miserable for ordinary people, wrote Marisel Moreno, a University of Notre Dame professor of Latina/o literature, in the Hill.

The people weren’t happy when the island’s secretary of justice, Wanda Vázquez, appeared poised to replace her predecessor, feeling they would simply be replacing one corrupt politician with another, the New York Post wrote. But Vázquez said she didn’t want the job, the Daily News reported.

Late last week, Rosselló appointed a veteran politician, Pedro Pierluisi, as secretary of state, making him first in line to succeed the governor. On Friday, Pierluisi was sworn in as the new governor, making him the first governor in seven decades to be unelected, the Miami Herald reported. Legal challenges are expected, however, because Puerto Rico’s Senate has not approved Pierluisi’s appointment as secretary of state.

If Pierluisi is forced to step down, Vázquez would be next in line for the job.

Whoever finally inherits Rosselló’s office will also inherit the revolution he helped create.

Mexico’s foreign minister suggested his country may take legal action against the United States for failing to protect its citizens in the wake of a mass shooting in Texas that left six Mexican citizens among the 20 people killed.

“The president has instructed me to ensure that Mexico’s indignation translates into… efficient, prompt, expeditious and forceful legal actions for Mexico to take a role and demand that conditions are established that protect… Mexicans in the United States,” Foreign Minister Marcelo Ebrard said in a video posted on Twitter Sunday, according to Reuters.

“We lament these acts and we affirm our conviction that social problems should not be resolved with use of force and incitement of hatred,” Lopez Obrador said.

July was the most dangerous month for civilians in the Afghan war since May 2017, according to the United Nations Assistance Mission in Afghanistan (UNAMA).

Improvised explosive devices (IEDs) accounted for around half the casualties.

The special representative of the UN secretary-general suggested that the apparent progress in the ongoing peace talks could be the cause for the uptick.

“I call on all parties not to ramp up military operations thinking that doing so will give them a stronger position in talks about peace,” UN Secretary-General’s Special Representative for Afghanistan, Tadamichi Yamamoto, said about the casualty figures.

As the US and the Taliban sit down for another round of negotiations in Qatar, a recent UN report said 1,366 civilians were killed in the conflict between Jan. 1 and June 30, marking a 21 percent drop from the same period a year ago.

Sudan’s democracy activists initialed a constitutional power-sharing deal with the ruling military council on Sunday intended to pave the way for a transition to civilian rule following the overthrow of President Omar al-Bashir in April.

Under the pact, a joint military and civilian council will rule the country for a little over three years until elections can be held, the Associated Press reported. Sunday’s document clarifies the division of powers and settles other outstanding disputes associated with an earlier deal to establish a joint civilian-military sovereign council, a cabinet chosen by the protesters, and a legislative council comprising mostly members of the main protest coalition, the agency explained.

The deal is set to be finalized on Aug. 17, after which the military council will be disbanded and replaced by the members of the sovereign council.

In an apparent victory for the protest movement, Sunday’s document indicates that an independent committee will investigate the crackdown on the protesters’ main sit-in outside the military headquarters in Khartoum that killed scores of people in June, possibly seeking support from the African Union to bring those responsible to justice.

It’s common to see T-shirts with taglines like “My friend went to [city name] and all I got was this lousy T-shirt.”

A recent archaeological find, however, revealed that this joke isn’t new: It apparently goes back at least as far as the Roman Empire, Time magazine reported.

Archaeologists in London discovered an iron stylus – an implement used to write on wax-filled wooden tablets – with an inscribed joke about being broke and bringing a cheap gift all the way from Rome to the province of Britannia.

“I have come from the City,” reads the inscription. “I bring you a welcome gift with a sharp point that you may remember me. I ask, if fortune allowed, that I might be able (to give) as generously as the way is long (and) as my purse is empty.”

Despite the joke inscription, officials from the Museum of London Archaeology explained in a blog post that the stylus makes a serious comment about how interconnected the sprawling Roman Empire was. The stylus, they wrote, “highlights the crucial role that writing and literacy played in allowing traders, soldiers and officials to keep in contact with peers, friends and family, some of whom lived over a thousand miles away.”

It also provides “a touching personal insight into the humor of someone who lived nearly 2,000 years ago.”