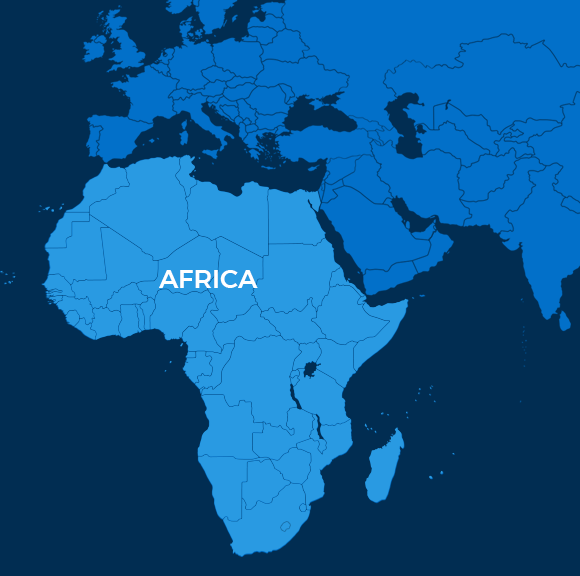 That $3.4 trillion is only a portion of the continent’s potential, however.

Intra-regional trade accounted for only 17 percent of African exports in 2017, according to Reuters. That’s in contrast to 69 percent in Europe and 59 percent in Asia.

“The eyes of the world are turned towards Africa,” Egyptian President Abdel Fattah al-Sisi, who serves as chairman of the African Union, said at a recent summit in Niger that included representatives from the 54 nations in the trade bloc. “The success of the AfCFTA will be the real test to achieve the economic growth that will turn our people’s dream of welfare and quality of life into a reality.”

The trade pact got a boost at the Niger summit, reported the Associated Press, when Nigeria, Africa’s largest economy, agreed to ratify it. France 24 explained how Nigerian trade unions and business groups had feared competition from foreign workers, but officials opted to join the bloc to enjoy lower tariffs on commerce with other African countries that many argue are suppressing local economies.

Benin has also agreed to join the new trading bloc. Only Eritrea has yet to join.

The bloc comes at an interesting moment in economic history as the developing world’s economic clout grows. China’s gross domestic product is on track to surpass that of the US in the coming years. African leaders believe it’s high time their people gained their share of the proceeds from the worldwide pie.

“Economic progress is what makes the world go around,” said Nigerian President Muhammadu Buhari in a statement posted online after he signed the deal, CNN reported. “Our position is very simple, we support free trade as long as it is fair and conducted on an equitable basis.”

Institutions, rules and offices – the bloc will be headquartered in Ghana – still have to be finalized.

Critics also pointed out that the agreement wouldn’t necessarily lead to new roads, power stations and other infrastructure overnight.

But investors are eager. Many are looking to hedge their holdings in the United States, where the economy has had a run that sometimes appears too good to be true, and Europe, where Brexit, Italian solvency, Deutsche Bank’s troubles and other issues have undermined confidence.

“In the context of escalating geopolitical and market uncertainty in developed economies, investors are increasingly likely to explore opportunities in ‘frontier’ markets,” wrote CNBC.

Unsafe at Any Speed

Amnesty International joined Democratic lawmakers and others in criticizing a reported deal to designate Guatemala a “safe third country” in a bid to stem migration to the United States.

“Any attempts to force families and individuals fleeing their home countries to seek safety in Guatemala is outrageous,” said Charanya Krishnaswami, Amnesty International’s advocacy director for the Americas, citing Guatemala’s own problems with poverty and violence.

Reportedly signed on Friday, the “safe third country” arrangement would set in place a system in which migrants seeking refuge in the US who travel through Guatemala would be compelled to seek asylum there. As the Washington Post reported, that could result in tens of thousands of asylum claims from migrants that Guatemala is ill-equipped to support.

President Jimmy Morales went ahead with the pact without approval from the Guatemalan Congress, despite a constitutional court ruling that affirmed such approval was necessary. So the deal is not likely to survive following Guatemala’s Aug. 11 runoff presidential election to choose his successor. But a political crisis of some kind is likely.

Russia detained nearly 1,400 anti-government protesters on Saturday in what marked the largest such crackdown this decade, though only around 150 protesters remained in detention Sunday, according to the Russian police-monitoring group OVD-Info.

The crackdown began several days before Saturday’s rally with the arrest of opposition leader Alexei Navalny on Wednesday, the Associated Press reported. In the latest step in an oft-repeated dance, Navalny was sentenced to 30 days in jail for calling for Saturday’s protest.

Such anti-government protests are more broadly oriented toward ousting President Vladimir Putin. However, the specific issue this time was a decision by the election authorities to bar some opposition candidates from running in the Sept. 8 vote for Moscow city council.

The police response was forceful, resulting in several demonstrators reporting broken limbs and head injuries. The authorities claimed their actions were justified, given the illegal nature of the gathering. The US embassy criticized the “use of disproportionate police force.”

Meanwhile, Navalny was hospitalized after suffering an acute allergic reaction in jail on Sunday, Reuters reported.

Myanmar government ministers failed to convince Rohingya refugees living in camps in Bangladesh to return home as second-class citizens over the weekend, even as pressure mounts from the US to hold the army accountable for what Washington calls ethnic cleansing.

Myanmar has long insisted that the more than 700,000 Rohingya who fled a brutal military crackdown in 2017 are welcome to return to their homes, the Wall Street Journal reported. And the government claims that it’s safe for them to come back.

But as the United Nations and Rohingya refugees themselves insist Myanmar has done little to make that claim a reality, the government ministers who met with Rohingya leaders over the weekend attempted to convince them to return without full citizenship rights.

The Buddhist-majority country denies the Muslim Rohingya full citizenship and restricts their ability to travel and work.

Without their mama protecting them, bird hatchlings are practically defenseless against predators.

Nature, however, has equipped unhatched embryos with an alarm system that allows them to warn nearby eggs about potential predators, Science Alert reported.

In an experiment, scientists exposed pairs of unhatched yellow-legged gull eggs to the calls adult birds make to warn that predators are nearby. The researchers noted that the exposed embryos would then vibrate more to alert a third unexposed sibling to potential danger.

All three eggs in each clutch, including the “naïve” ones that didn’t hear the alarm calls, took longer to hatch than eggs in a control group. And after hatching, all three chicks exhibited the same defensive behaviors – they made less noise and crouched down more.

They argued that the study shows that birds can adapt to their environment even before birth, a trait that is not common in placental mammals, such as humans. “Our results clearly show that bird embryos exchange valuable information, probably regarding risk of predation, with their siblings,” they wrote.

The team hopes to learn more about how this birdy sense works and if unhatched eggs can notice other factors in their environment.

At least, they don’t need mama bird to tell them about “stranger danger.”