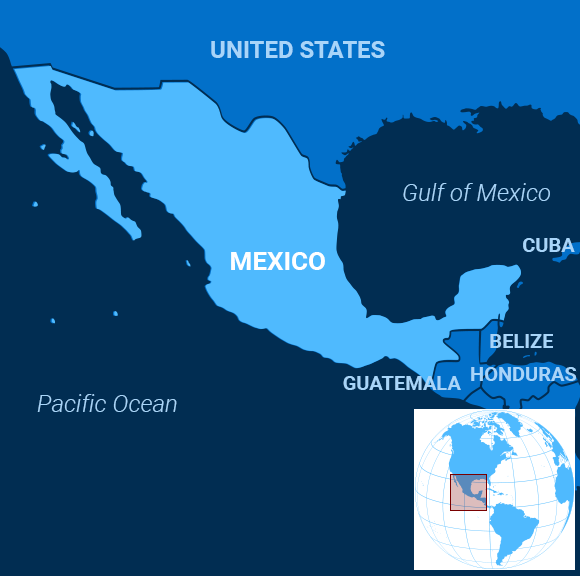 Mexican officials recently sold luxury houses, including one with an escape tunnel, in an auction of property formerly owned by drug barons. The sales were part of Mexican President Andrés Manuel López Obrador’s push to generate extra revenue as he cuts spending on extras like the presidential jet and presidential guard. The millions raised would fund social welfare programs in states where crime is high, said the left-wing president.

“[Buyers] will know that in addition to acquiring a good, they will be also be doing good – that is, they will be helping those who need support because of the situation of poverty and marginalization they suffer,” Lopez Obrador told Reuters recently.

Ironically, around a month later, north of the border, US Senator Ted Cruz of Texas was arguing that assets of the Mexican drug lord Joaquín Guzmán Loera, known as El Chapo, should be seized and sold, so the proceeds could be used to fund a border wall with Mexico, the Hill reported. El Chapo’s “global criminal enterprise” is worth billions,” Cruz said, “and we should use every penny of that money to build the wall and secure the border.”

A federal judge recently sentenced El Chapo to life in prison for his role as a leader of the dreaded Sinaloa drug cartel. According to the New York Post, he complained about his time in a Manhattan jail and lamented how he won’t see his beauty queen wife again.

The American and Mexican governments are scoring victories against the traffickers, but the drug trade continues to take a toll on both countries. The New York Times wrote about how many experts believe the drug war has grown more violent since El Chapo’s incarceration. Homicide rates in Mexico are up – hitting a record 17,608 killings in the first half of 2019, the Associated Press reported Tuesday. Meanwhile, American leaders have spent innumerable hours debating border security, with little consensus among the American public to show for it.

The cartels keep growing. Many have opted not to cultivate celebrity leaders like El Chapo, who are bad for business. They have diversified, spending their ill-gotten wealth in other legal business sectors to enhance their power, too.

“The US and Mexico’s security forces have aggressively pursued what is referred to as the kingpin strategy: they go after the ‘head’ with the intent of weakening the ‘body,’” argued Syracuse University Mexico specialist Gladys McCormick in the Washington Post. “After a decade of this approach, policy analysts concur that it has failed and, if anything, has worsened the drug war.”

When it comes to the drug war, the US and Mexico will succeed – or fail – together.

Large areas of Venezuela remained without power on Tuesday, after the fourth nationwide blackout hit the country a day earlier.

As with previous incidents in March, the cause of the power outage was not immediately clear, but the government of beleaguered President Nicolas Maduro blamed it on “an electromagnetic attack” without specifying who might have been responsible or how it might have been carried out, CNN reported.

Given that smaller scale blackouts have become an almost daily occurrence as Venezuela’s economy has collapsed, failing infrastructure or demand overload is more likely, says opposition leader Juan Guaido, who has been recognized as the rightful interim president by more than 50 countries, including the United States.

Maduro’s government said it was working to restore power and ensure those affected have access to drinking water and other services. However, Maduro also said he had mobilized the army to deal with what he called a “criminal attack against the tranquility and the peace of the homeland” – perhaps signaling concerns that the resulting frustration may spark fresh protests calling for his ouster.

Spain’s Socialist Party leader Pedro Sánchez failed in his first bid to form a government on Tuesday, inching the country closer to its fourth election in five years.

After a week of wooing, the caretaker prime minister was unable to garner the support of the far-left United We Can party, so only his own 123 Socialist lawmakers and one member of a marginal regional party voted to keep him in power on Tuesday, the Associated Press reported.

That left him far short of the 176 out of 350 lower house lawmakers he needed to be able to form a government. He’ll get another crack at the job on Thursday, when under Spain’s constitution he won’t need a majority, only more “yes” votes than “nos.” But he’ll still need United We Can to manage it, as well as the support of a couple smaller, regional parties from Catalonia and the Basque Country.

If that attempt fails as well, he’ll likely keep trying until the Sept. 23 deadline for fresh elections, since the rightwing parties cannot reach a majority, either, the agency said.

Russia and China conducted their first joint air patrol over the Sea of Japan and the contested waters of the East China Sea, prompting South Korea to fire flares and warning shots and Japan to register a protest.

The Russian defense ministry said four bombers, supported by fighter jets, were involved in the patrol, the BBC reported. The warning fire from South Korea was prompted when they flew over the disputed Dokdo/Takeshima islands, which are occupied by South Korea but also claimed by Japan.

Russia maintains that the patrol stuck to “neutral waters” and attracted tails from foreign fighters 11 times during the exercise, during which Moscow accuses South Korean pilots of performing “dangerous maneuvers.”

While it stops short of an outright military alliance, the first joint air patrol sends a powerful signal of the developing military relationship between Moscow and Beijing, noted BBC defense correspondent Jonathan Marcus.

Notably, China and Japan also have a territorial dispute in the East China Sea, where both countries lay claim to the Senkaku/Diaoyu islands in an area that is near major shipping routes and rich in energy reserves.

Fans of pinot noir might be sipping a wine very similar to what Roman emperors savored during their celebrations.

That’s because winemakers have been using the same varieties of grapes for millennia, NPR reported.

In a study published in the journal Nature Plants, researchers analyzed the genetic lineages of 28 ancient seeds found in nine archaeological sites in France.

Results revealed that several modern grape varieties – such as pinot noir and syrah – were similar to the grapes used by ancient Roman winemakers.

“It’s incredibly likely that someone 1,000 years ago was drinking something that’s pretty much genetically identical to what we drink today,” said study co-author Nathan Wales.

Wales’ team argued that consumers have been picky about their drink since antiquity, pushing winemakers to preserve popular and enduring grape varieties.

Producers would cut off pieces of wood from the vines and replant them, creating a clone of the original plant with qualities identical to those of its “parent.”

Wine aficionados might be pleased at the idea of drinking like royalty, but the dedicated preservation hasn’t allowed the plants to evolve very much, making them more vulnerable to new pests and pathogens.

“We [may] need to use more chemicals and sprays in growing [them],” according to researcher Zoë Migicovsky, who was not involved in the study.