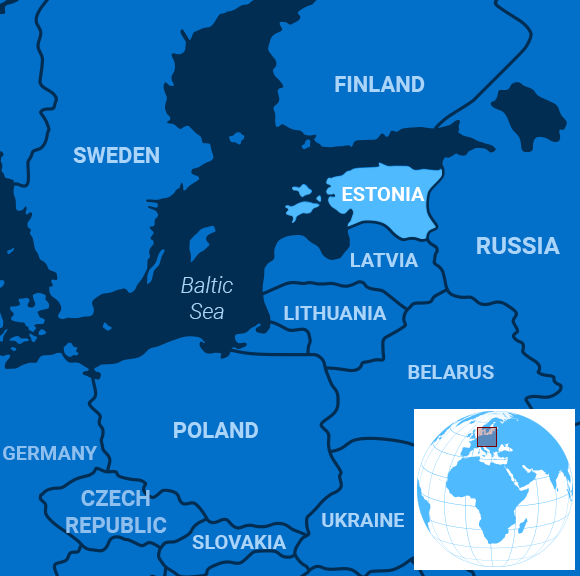 Since then, the party, known as EKRE, has embarrassed the prime minister at least a couple times, reported Politico. One of his ministers wrote an anti-Semitic remark on Facebook. A party leader called for a “white Estonia.”

The party has also wielded influence over policy. Estonia, for example, joined the Czech Republic, Hungary and Poland – all run by right-wing populist governments – in blocking an effort to make the EU carbon neutral by 2050.

Such incidents have taken some of the luster off Estonia, long viewed as one of the success stories of post-Communist Europe, argued the Financial Times.

“Even if Estonia has given up its place as the coolest, most advanced post-commie country, the @EstonianGovt can still take pride being the most ridiculous, ludicrous and disdained government in Europe,” tweeted ex-Estonian President Toomas Hendrik Ilves recently. “Not only disdained but considered stupid and Nazi by the rest of the West.”

Estonia borders Russia but traditionally it is Western-looking. Keeping in mind Russia’s annexation of the Ukrainian territory of Crimea, Estonian officials regularly lobby for more international help from NATO on confronting the Russian influence, for instance, noted Defense News.

The conflict between East and West involves cyber battlefields, too.

Estonia is at the vanguard of NATO’s cyber defense. NBC reported that the country recently announced it would store its data – such as land and business registries – in the safe-house servers of Luxembourg. Estonia even created an “e-residency” program to let anyone become a virtual citizen in a bid to grow companies in the country, ZDNet wrote. Other digital efforts have improved the country’s healthcare system.

But Estonia also contains a large minority of ethnic Russians whose identities can be split between the two countries.

“Estonia lies at the frontline of efforts to contain Russian revanchism,” wrote the Atlantic in a bizarre story about an ethnic-Russian Estonian soldier caught in a web of espionage. “Once occupied by the Soviet Union, the country has no intention of losing its independence again and has eagerly joined Western economic and defense alliances. … Yet ties between Russian and Estonian citizens are much more fluid.”

Long fiercely Western, yet taking on the populist trends surging on the rest of the continent, which include overtures toward Russia, Estonia’s future moves are worth watching.

Turkey’s foreign minister said Monday that Ankara would retaliate if President Donald Trump were to follow through on threats of economic sanctions against the longtime ally in response to its purchase of a Russian missile defense system.

“If the United States portrays an adversarial attitude towards us, we will take retaliatory measures, as we’ve told them. This is not a threat or a bluff,” Foreign Minister Mevlut Cavusoglu said in an interview with broadcaster TGRT Haber, according to Reuters.

Cavusoglu added that he did not expect the US to follow through on the threat, though Washington said last week it was beginning the process of removing Turkey from the F-35 stealth jet program – costing Turkish defense companies that are part of the supply chain billions of dollars.

The US has said the Russian S-400 missile system’s software could compromise the F-35s. However, if it’s actually where Turkey is spending its money that’s the root of the anger, pulling the plug on the stealth jet program is likely to spur greater weapons collaboration with Moscow.

Chinese state media is accused of fanning the flames after protests turned violent in Hong Kong over the weekend, with police firing tear gas and rubber bullets after demonstrators vandalized a Chinese central government office and white-clad counter-protesters storming a subway station and beating up people they accused of participating in the protest movement.

China’s state media aired images from the aftermath of the protests on Monday, while commentators decried the demonstrators as “radical protesters.” Meanwhile, support for the pro-government vigilantes was allowed to proliferate on the country’s regulated social media, the Wall Street Journal reported.

That appears to be setting the stage for a stronger response to the demonstrations, most likely starting with the arrest of protesters by the Hong Kong authorities but possibly escalating to the deployment of the Chinese military, the Journal said.

Without outlining a specific course of action, Foreign Ministry spokesman Geng Shuang said Monday that Hong Kong authorities should use “all necessary measures to…safeguard the rule of law in Hong Kong and punish criminals.”

The Bigger They Are

Kenya’s finance minister was arrested Monday on corruption charges in what could be a landmark case for the East African country.

Finance Minister Henry Rotich is accused of impropriety in connection with the procurement and payment process for the Arror and Kimwarer hydroelectric dam projects, which have been under investigation by authorities since September, the UK’s Financial Times newspaper reported.

Though corruption allegations against senior Kenyan officials are common, the case marks the first arrest of a sitting finance minister on such charges. Both Rotich and the Italian construction company awarded the contract have denied any wrongdoing.

However, Noordin Haji, the Director of Public Prosecutions, said Monday that the Kenyan treasury found a way to pay CMC Di Ravenna about $165 million more than the $465 million stipulated in the contract.

Rather than a real commitment to battle graft, the charges may signal an explosion of simmering differences between Rotich and President Uhuru Kenyatta, said political analyst Alutalala Mukhwana.

“This is going to be an open warfare between the president and his deputy,” Mukhwana said.

When people read from their smartphones or tablets before going to bed, they’re reducing their chances of getting quality sleep: The blue light emitted by these devices decreases the production of melatonin, a hormone that regulates the sleep-wake cycle.

Scientists have recently discovered the same blue light might also be responsible for weight gain and diabetes, Deutsche Welle reported.

In a study, they found that blue light caused lab rats to crave sugar. The researchers explained that when rodents were exposed to the sleep-depriving light for an hour during the evening, they were more likely to consume sugar water, instead of their healthy snack.

The results support a previous study that found a strong correlation between blue light and high glucose levels in humans.

While kicking a smartphone addiction may be nearly impossible, researchers advise limiting the use of electronics at night or using the device’s “night mode” feature, which turns the screen more orange.

“Limiting the amount of time that we spend in front of screens at night is, for now, the best measure to protect ourselves from the harmful effects of blue light,” said study co-author Anayanci Masís-Vargas.