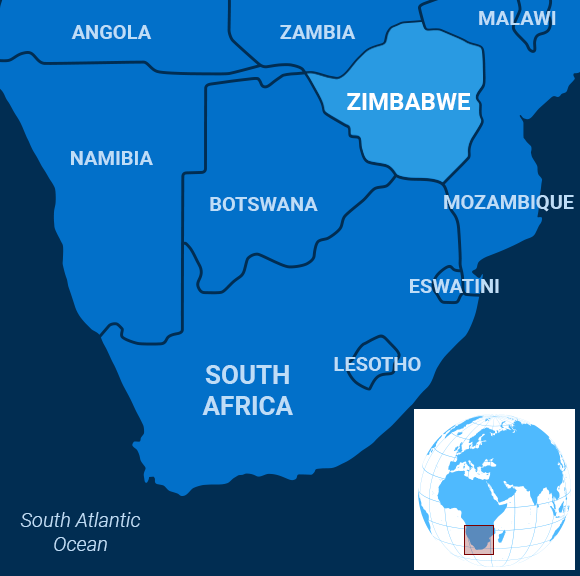 Zimbabwean businesses are operating at night when they’re more likely to have electricity. Over the past week, there were blackouts that lasted at least two days.

Those might be valid excuses. But, as Sky News noted, President Emmerson Mnangagwa is perhaps rightly taking the blame for the power outages as well as 90 percent unemployment and inflation hitting 100 percent.

Mnangagwa and Zimbabwe’s army ousted longtime dictator Robert Mugabe in November 2017. Last year, when Mnangagwa ran to keep his presidency, he promised “the Zimbabwe you want” on the campaign trail.

But at the same time, Mnangagwa has continued the brutal repression of dissidents and other abusive practices that he oversaw when he was one of Mugabe’s righthand men and known as “the crocodile,” Sky News reported in a separate video.

Perhaps Mnangagwa’s greatest flub has been his decision in June to ban the use of foreign currency in the southeast African country and reintroduce the Zimbabwean dollar a decade after hyperinflation caused its collapse.

“We were living in an abnormal situation. We should actually be congratulated for taking this step,” he said, according to the Associated Press. “What we have done is we have gone back to normalcy. Normalcy is that the country must have its own currency.”

But no one wants to use it.

Meanwhile, Zimbabweans have few memories of normalcy. After almost 40 years of Mugabe’s rule, they have become wary of using the currency of their failing economy, using US dollars, euros, British pounds and other currencies instead. Ending transactions in foreign currencies now is causing chaos.

“I must have foreign currency to import my leather products,” Crispen Dembedza, 51, who runs a leather clothing shop in Harare’s central business district, told the Washington Times. “Without foreign currency, I won’t be able to remain in business. I can’t find any local suppliers [of my products], and if they were any they would not be able to meet demand.”

Critics also said the move was likely illegal because Parliament had failed to approve the plan, Bloomberg wrote in another story. It certainly wasn’t well-planned. Mnangagwa announced the policy by decree less than a day after his finance minister said the country was not prepared to end its “multi-currency economy.”

Zimbabwean leaders are already pleading with China for a $2 billion bailout to stabilize their economy, the Zimbabwe Independent reported. China has not been enthusiastic. Zimbabwe had also sought a smaller bailout from South Africa, but leaders in Pretoria declined, citing their own money problems. After all, Zimbabwe has yet to pay off loans from former bailout packages, the newspaper added.

Mnangagwa appears to be on his own. And so do his people.

Drama on the High Seas

A British warship confronted three Iranian vessels in a high-stakes altercation in the Strait of Hormuz on Thursday, after UK forces last week helped to seize an Iranian ship off the coast of Gibraltar that was allegedly breaking sanctions to transport oil to Syria.

Britain’s Defense Ministry said Thursday that the three Iranian vessels tried to impede the passage of the British Heritage, a tanker carrying oil for BP PLC from the Persian Gulf, in what might have been a nod to calls for retaliation for the Gibraltar incident, the Wall Street Journal reported.

Iran, which has called the seizure of its ship an act of piracy, denied any attempt to stop the tanker, according to Iranian news agencies.

Though it ended without shots fired, the incident could speed the US plans to develop a joint force to protect commercial shipping near Iranian waters. It could also impact oil prices, considering that about a third of the crude that is transported by sea passes through the Strait of Hormuz, the Journal noted.

The UN Human Rights Council has voted to probe alleged crimes committed during the Philippine government’s war on drugs – which has resulted in the killing of at least 6,600 dealers and others since President Rodrigo Duterte launched the program in 2016.

The resolution mandates a comprehensive report on the human rights situation in the Philippines that will focus on reports of extrajudicial killings, arbitrary arrests and enforced disappearances associated with the drug war, the BBC reported.

Out of the 47 countries in the council, 18 voted for the resolution, 14 opposed it and 15 abstained.

The Philippines called it a “travesty.”

While Philippines’ police say the crackdown has resulted in 6,600 deaths, human rights activists peg the total far higher, at more than 27,000 people – among them a three-year-old girl shot dead during a raid last week.

Despite its heavy toll, the drug war and Duterte remain popular among Filipinos, the BBC noted, with the president enjoying a 79 percent approval rating, according to a poll conducted earlier this year.

The French Senate passed a 3 percent tax on the revenue earned locally by tech firms like Amazon, Facebook and Google on Thursday, despite President Donald Trump’s objections that it unfairly targets US companies.

“France is sovereign, and France decides its own tax rules,” French Finance Minister Bruno Le Maire said in a statement, according to CNBC.

If the US deems the tax to be targeting American firms, as Trump suggests, it could levy its own tariffs on French goods, expanding America’s trade war to another country.

France argues the unilateral move is designed to spur progress on a global or Europe-wide policy to tax the tech giants, the New York Times reported. Such measures have been considered by other countries and the European Union. But some, for example in Germany, fear the additional tax will hurt local business, especially the nascent tech sector and the auto industry.

Many know the old advice to smile when they’re having a bad day. The belief that a muscle movement in the mouth area can change a person’s emotional state is an enduring one.

The reality, however, is far more complicated, NPR reported.

Researcher Nick Cole and his team carefully reviewed 50 years of data, including hundreds of studies that tested the theory that changing one’s facial expression can alter one’s mood.

The results revealed that smiling wasn’t as effective as previously believed: If 100 people with similar moods smiled, only seven of them might expect to feel happier.

The debate over whether smiling could influence emotions has gone on “for at least 100 years – since the dawn of psychology,” Coles said.

Previous studies have also found discouraging results on the effect of smiling, with many arguing that while putting on a grin is fine, a habitual forced smile can negatively affect a person.

A recent paper suggested that disgruntled service workers who must smile a lot for customers might be at higher risk of heavy drinking after work.

While more research is needed, Coles suggested that people should stop telling others to put on a happy face.

“Because I know when I’m sad and people tell me to smile, it just makes me more angry,” he said.