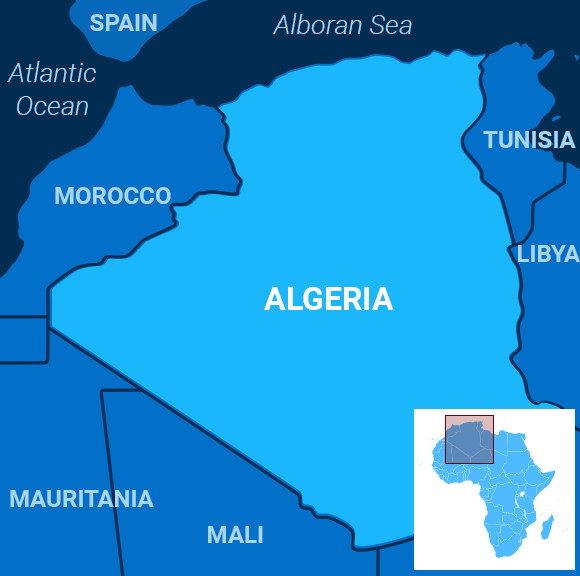 Military brass in the North African country recently made public promises of stability as the country prepares for the expiration of interim President Abdelkader Bensalah’s three-month term in office on July 9.

“Our goal is to serve the country and to honestly accompany the people, in order to overcome the current crises and to reach the constitutional legitimacy,” Algerian Army Chief Ahmed Gaid Saleh said in an address to officers in Algiers. “We are expecting an understanding that reaches to the level of confidence between the army and the people.”

Elections for a new president had been scheduled for July 4, but were canceled after too few candidates filed to run for office and protests erupted over the election process, Bloomberg explained. Bensalah has yet to set a new date, reported the BBC.

Bensalah, a former parliamentary speaker, replaced former President Abdelaziz Bouteflika in April. The aging and ailing Bouteflika had run the country for 20 years with the support of the army. But, suffering ill health, he lost the confidence of the military and other elites in the face of widespread protests over youth unemployment, suppression of dissent and other issues.

Now Bensalah is leaving his job as head of state while protesters are also calling for the resignation of Prime Minister Noureddine Bedoui and other Bouteflika appointees, reported the Turkish state-run news agency Anadolu. “Thieves, you have destroyed the country,” read the protesters’ banners, according to Al Jazeera. “Algeria is a free and democratic country.”

The activists are serious about change and steadfast in their indignation. “The government ministers installed by the departing Mr. Bouteflika have so little credibility that they are often chased back into their cars by protesters when they try to make official visits,” wrote the New York Times.

Like the generals, civil-society groups that have been active in the protests are also seeking the public trust. They have been meeting to hatch and discuss proposals for the country’s direction as the power vacuum looms, wrote Qantara.de, a joint project of Deutsche Welle, the Goethe Institute and the German-based Institute for Foreign Cultural Relations. Under the autocratic Bouteflika, human rights, anti-corruption and other efforts were in a “state of total disunity,” the activists said.

The anti-Bouteflika forces have scored victories. Prosecutors have jailed two former prime ministers and other officials of the former president’s government amid graft investigations, for example. Also, Algerian parliamentary president Mouad Bouchareb quit Tuesday after protesters, who viewed him as a pillar of the ruling elite, demanded he resign, Al Jazeera reported.

Small victories and big ones aside, the protesters are waiting for the ultimate prize: A leadership they can trust.

As US President Donald Trump prepares for a military-themed Fourth of July celebration, his counterpart in Russia signed legislation suspending the 1987 Intermediate-range Nuclear Forces Treaty (INF).

The demise of the longstanding treaty has prompted worries of a new arms race and sparked NATO to begin discussing defensive countermeasures, but the US was already slated to pull out of the pact on Aug. 2 if Russia failed to decommission missiles that Washington and its NATO allies say violate the terms of the deal, Reuters reported.

The new law comes as Russian President Vladimir Putin deals with allegations that Russian officials attempted to prevent the full details from coming to light about an accident on board a military submarine earlier this week that killed 14 sailors, the agency reported separately.

The salient detail missing from the reports: Whether or not the submarine was nuclear-powered — an omission that prompted Russian media to make unflattering comparisons with the handling of the meltdown of a Soviet nuclear reactor in Chernobyl in 1986.

An End, a Beginning

The son of former Prime Minister Rajiv Gandhi, grandson of the iconic Indira Gandhi and great-grandson of Jawaharlal Nehru ­– India’s first prime minister – Rahul made the Congress vulnerable to accusations of “dynastic politics.”

His resignation – if it is accepted – could leave the party that led India through most of its first 70 years of independence in even worse disarray, the Associated Press reported.

If he truly leaves the party to the internal democracy he has advocated for years without really instituting, the Congress likely faces a hard rebuilding period of factionalism, as the Gandhi family has long been its main unifying force, analysts said. On the other hand, if he tries to run things from behind the scenes, that might be still more damaging, said Nilanjan Mukhopadhyay, a biographer of Prime Minister Modi.

One Bomb Too Far

The United Nations envoy to Libya, Ghassan Salame, decried an air strike on a migrant detention center in Tripoli that killed at least 44 people and wounded 130 others as a possible war crime, as the gruesome incident prompted new soul-searching over the European Union’s efforts to prevent such migrants from crossing the Mediterranean Sea.

It’s not yet clear who is responsible for the air strike, though the UN-recognized government in Tripoli blamed rebel commander Khalifa Haftar, whose forces have been fighting to seize the city, Al Jazeera reported.

“The absurdity of this ongoing war today has led this odious bloody carnage to its most hideous and most tragic consequences,” the UN Support Mission in Libya said in a statement.

Haftar’s Libyan National Army denied responsibility for the strike, which followed a warning by the commander of its air force that aerial bombardment would be stepped up because “traditional means” to “liberate Tripoli” had been exhausted.

Notably, Haftar seems incapable of taking Tripoli despite the backing of Saudi Arabia, Egypt and the United Arab Emirates (UAE), the Economist reported.

In recent years, some rice farmers in Japan have revived a centuries-old tradition of using ducks as natural herbicides and pesticides for their fields.

The practice has also found success elsewhere around the world. Even so, the farmers’ web-footed friends might be getting some competition, according to the Daily Mail.

A Japanese engineer working for carmaker Nissan has developed a prototype robot that can imitate the paddy field ducks.

Named “Aigamo,” after the ducks of the same name, the robot is about the size of a Roomba vacuum cleaner and is equipped with two rotating rubber brushes on its underside, which oxygenate the water by stirring it up and prevent weeds from taking root.

The new robot uses Wi-Fi, solar power and GPS to navigate the fields.

At the moment, its creator isn’t planning on mass producing the mechanized “duck,” but he’s testing it out in the paddy fields of Yamagata Prefecture in northeastern Japan.

If the results are successful, the birds might face competition in the future, as their “jobs” will be taken by artificial intelligence.

Still, the locals might want to keep the real thing: the ducks aren’t the migratory kind and they make tasty meals when they fatten up.