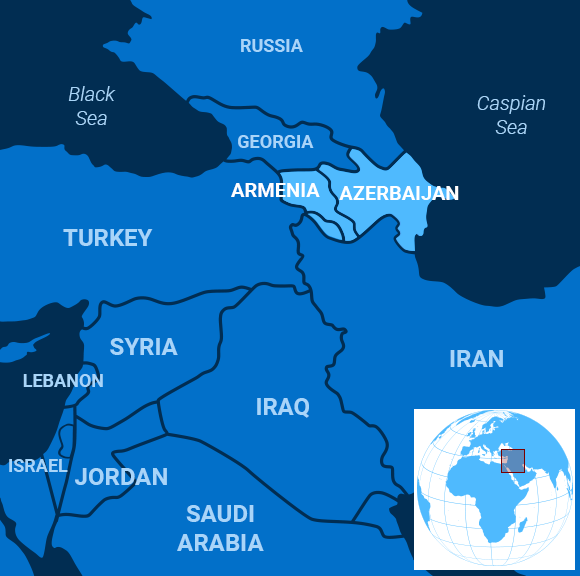 The ex-Soviet republics of Armenia and Azerbaijan signed a cease-fire agreement 25 years ago this month.

The conflict stemmed from Joseph Stalin’s decision in 1921 to give Azerbaijan control of an Armenian enclave within its territory called Nagorno-Karabakh.

As the Soviet Union fell apart in the early 1990s, disputes over the territory turned hot as Nagorno-Karabakh declared itself a republic. A war broke out between the two sides. Armenia arguably prevailed and took de facto control of the region.

Today, the fighting has largely subsided but still persists.

“We periodically hear firing, but that doesn’t concern us – it’s far away,” Makhmud, a beekeeper in a village in Nagorno-Karabakh, said in an interview with Kommersant, via the news translation website Worldcrunch.

Armenian snipers recently killed an Azerbaijani military officer. Two days later, Azerbaijani gunfire killed an Armenian conscript. A total of four soldiers, two on each side, have died this year. The tit-for-tat has undermined negotiations for a permanent truce, wrote eurasianet.

The sands are shifting under the feet of Armenian leaders, however, the National Interest argued. The international community has not recognized Nagorno-Karabakh. The United Nations has repeatedly said the region is part of Azerbaijan. Both Azerbaijan and Turkey have closed their borders with Armenia – with whom Turkey also has a historic conflict. That means 83 percent of landlocked Armenia’s borders are shut. That’s a breeding ground for corruption and economic stagnation.

Meanwhile, Azerbaijan is oil-rich. Only Russian arbitration keeps its leaders from renewing their push to retake Nagorno-Karabakh. Turkey and Azerbaijan are strengthening ties, reported the Anadolu Agency, a Turkish newswire.

The two sides spit vitriol at each other, with politicians in Nagorno-Karabakh perhaps stirring the pot the most. “Azerbaijan still maintains its Nazi, revanchist policy towards Armenians,” David Babayan, spokesman for the president of Nagorno-Karabakh, told Public Radio of Armenia.

Such hatred plays into the hands of Armenians who want to preserve the status quo, countered Azerbaijani leaders in Trend, a Baku-based news agency.

Armenia has serious internal problems, too. Political turmoil led to widespread protests last year after former President Serzh Sargsyan sought to circumvent term limits by getting the long-dominant Republican Party to name him prime minister. The leader of the protests, Nikol Pashinyan, eventually ousted and replaced him. Another ex-president, Robert Kocharyan, also stands accused of corruption and complicity in a brutal suppression of protests in 2008 that led to 10 deaths.

Back on the ground in Nagorno-Karabakh, national politics, like the fighting, feels far away to Makhmud and other residents of the village of Dzhodzhug-Mardzhanly. But what doesn’t is the entrenched feeling of home.

Makhmud’s village was recaptured by Azerbaijani troops in 2016 and since has been resettled by ethnic Azeris, for now.

“We’ve come back home, and we’re not going anywhere,” he said.

All Along the Watchtowers

Mexico deployed nearly 15,000 soldiers and National Guardsmen near its border with the United States to stem the flow of illegal immigration, according to the head of the Mexican military.

The country has sent 6,500 security personnel to Mexico’s southern border area with Guatemala, where many migrants enter the country seeking to travel north to the US. But a larger contingent has been deployed in the north, Sandoval said.

“In the northern part of the country we have a total deployment of 14,000, almost 15,000 units between the National Guard and the Army,” Sandoval told reporters.

A new force formed from soldiers, marines and federal police, Mexico’s National Guard is more like Italy’s Carabinieri or France’s Gendarmerie than the US force of the same name, according to Mexico’s ambassador to the US.

But Mexican President Andres Manuel Lopez Obrador formed it to confront the country’s plague of violence resulting from the drug trade – not to police the country’s borders.

The leader of Georgia’s ruling party announced Monday that the country’s next election would use the proportionate voting system, conceding to a key demand of protesters demonstrating in front of Parliament for the past four days.

But the demonstrators appeared unmoved by the offer from Bidzina Ivanishvili, founder of the Georgian Dream party, the Associated Press reported. They remain focused on securing the ouster of the interior minister, whom they hold responsible for a violent crackdown Thursday.

The crisis has its roots in anger against Russia, which defeated Georgia in a one-sided war in 2008 and maintains a military presence in Georgia’s two breakaway provinces of Abkhazia and South Ossetia, the agency explained.

Thursday’s conflict erupted when protesters attempted to storm the Parliament building after a Russian lawmaker sat in the speaker’s chair during an international meeting of legislators. Meanwhile,  demonstrators view Ivanishvili, Georgia’s richest man, who made his fortune in Russia, as a stooge for Moscow.

With a fully proportional system, smaller parties would gain a stronger voice in the legislature, where they would receive seats in proportion to their vote share – even if that were only 1 percent.

A court in Vietnam sentenced US citizen Michael Phuong Minh Nguyen, 55, to 12 years in prison after convicting him of attempting to “overthrow the state.”

Nguyen, who was born in Vietnam but has lived in the US since childhood, admitted that he wanted to incite protests, his lawyer told the BBC. But he denied planning to attack government offices in Hanoi and Ho Chi Minh City with petrol bombs.

Nguyen and the three others were pulled off a bus in the city of Da Nang and arrested last July, according to the Orange County Register. His family said he was in Vietnam to visit relatives and friends and denied he was involved with any political activities.

The Vietnamese government claims he was part of “an organization called Quoc noi quat khoi [that] drew up plans to buy weapons, incited people to join illegal demonstrations and to conduct activities to overthrow the State of the Socialist Republic of Viet Nam by violent measures,” according to an official statement.

If some cats are more friendly toward humans than others, that’s likely because of their breed.

Finnish researchers recently discovered that different feline breeds behave in different ways, and nearly half of these behaviors are inherited, Cosmos Magazine reported.

They noted that the biggest variance among breeds was in their activity levels. The least was in stereotypical behavior – which are repetitive behaviors like pacing or paw chewing that have no apparent purpose.

So, for example: British Shorthairs tend to be less active and have less contact with people, while Korats are more sociable and active.

The team also speculated that selective breeding for certain traits – like eye or fur color – has also allowed genes for behavioral traits to “hitchhike” with the chosen genes.

They argued that because behavioral traits are inheritable, cat breeders could also factor in personality when creating new furry breeds.