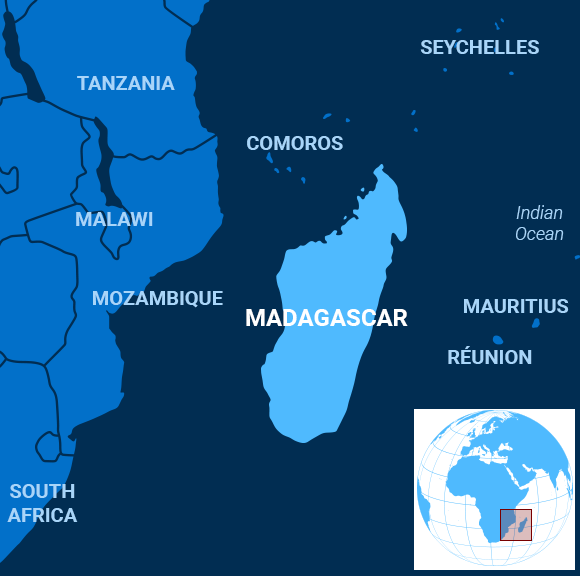 Rolling Up the Shirt Sleeves

The East African island of Madagascar has the dubious distinction of suffering the worst deforestation on the planet.

So it’s heartening that some Malagasy teenagers are working with environmentalists to practice sustainable farming that feeds people while preserving forests in the Indian Ocean nation.

The forest “provides the fresh air we breathe and helps the livelihoods of the local people,” Omega, a 16-year-old farmer, told the BBC. “If it continued to be destroyed, there would be less water to drink. There would be a loss of habitat for wildlife in the forest, such as the lemurs – they would disappear. They would all die.”

The country is also among the most impoverished in the world.

That fact recently spurred a group of mothers to launch their own public health initiatives with the help of local and international aid groups. The mothers hold song circles in the southern town of Tanandava, for example, to inculcate lessons on hygiene, water treatment and the virtues of spacing out pregnancies, wrote UNICEF USA in Forbes.

Unfortunately, that hard work is necessary in part because many Malagasy leaders have washed their hands of addressing their country’s daunting challenges.

Madagascar’s anti-corruption agency recently recommended that prosecutors charge more than half of the country’s lawmakers – 79 out of 151 – with accepting bribes and other corruption-related crimes, reported Agence-France Presse.

That action stems from investigations into allegations that parliamentarians accepted $14,000 apiece last year to vote in favor of electoral law changes that would benefit ex-President Hery Rajaonarimampianina in the November 2018 presidential elections.

Thousands took to the streets to protest the changes. After two months of demonstrations, the country’s top court ruled the changes unconstitutional. Andry Rajoelina won the presidential election and promptly pledged to root out graft in government.

As Africanews explained, he found more rot than initially expected. Investigators also recently alleged that Madagascar’s former ambassador to the United Nations and two former staffers at its embassy in Washington, DC, had embezzled about $300,000 in public funds.

The anti-corruption office’s stunning moves came shortly before parliamentary elections that are slated for May 27. Few of the accused lawmakers are running for re-election. If found guilty, they could face up to five years in jail.

Rajoelina has more work to do. Last month, for example, Amnesty International claimed that long, torturous pretrial detentions are common in Madagascar, crowding prisons designed to hold around 10,600 people with more than 14,000 detainees who have not been convicted of any crimes.

Far-right and nationalist parties made significant gains in the European Parliament elections but parties committed to holding the bloc together managed to win two-thirds of the seats, according to exit polls.

Among the losers was France’s Emmanuel Macron, whose centrist Renaissance movement came second to Marine Le Pen’s anti-immigration, Eurosceptic National Rally, Reuters reported. But overall the gains of the far-right contingent led by Le Pen and Italian Deputy Prime Minister Matteo Salvini, among others, were not as great as they hoped, and others feared.

In France, Renaissance managed a 22 percent share of the vote, compared with National Rally’s 24 percent, while in Germany Angela Merkel’s conservatives lost seven percentage points over five years ago and the anti-immigration Alternative for Germany gained four points to reach 11 percent, according to exit polls. The Greens also appeared poised to win as many as 71 seats, up from 52 the last time in various countries, the Associated Press reported. Meanwhile, Salvini’s far-right League became Italy’s biggest party with nearly 34 percent. It had only 6 percent five years ago.

Nevertheless, pro-EU parties managed to hold onto 507 out of 751 seats, according to a projection by the European Parliament.

New evidence ties the head of the Colombian army to the alleged cover-up of the killing of civilians to beef up body counts in the fight against communist revolutionaries more than a decade ago – known as the “false positives” scandal.

An investigation insider provided the Associated Press with documents indicating that Gen. Nicacio Martínez Espinel signed off on at least seven questionable payments to informers who supposedly identified guerillas, supporting similar allegations lodged against the general by Human Rights Watch in February.

Taken with other circumstantial evidence, the signatures add new fuel to speculation that Martínez Espinel may have supported the practice of killing civilians and planting weapons on them to make the murder look like a victory in the fight against the rebels – though he said he has faced no criminal or disciplinary investigations and had no combat role during the dates mentioned on the new documents.

Notably, the evidence comes in the wake of reports that Martínez Espinel this year ordered troops to double the number of leftist guerrillas and criminals they killed, captured or forced to surrender in combat.

Not Gone, Not Forgotten

Three explosions killed at least four people and injured eight others in Kathmandu Sunday afternoon in an unpleasant reminder of the decade-long civil war that ended in 2006.

Police said the blasts appeared to be generated by improvised explosive devices, while an official told reporters that a Maoist splinter group has come under suspicion after the discovery of some of its pamphlets near one of the explosion sites, according to the BBC. The same group is alleged to have carried out an explosion in February that killed one person in Kathmandu.

No one has claimed responsibility for Sunday’s blasts yet.

Such attacks have been relatively rare since the end of the war, when the main contingent of Maoists laid down their arms and reformed as a political party that is now part of the ruling Nepal Communist Party (NCP).

However, the outlawed group police believe may have planted the explosives split from the main faction when it opted for ballots over bullets, noted the Times of India.

People are confused about whether they are fruits or vegetables, and aren’t sure how to define the flavor of store-bought ones – tastes like “dirt,” “blood,” and “chlorine” come up in searches.

But those labels may soon go away, thanks to research that could help make commercial tomatoes tastier, Deutsche Welle reported.

A team of researchers recently created a tomato “pan-genome,” using the genetic information of 725 wild and cultivated tomatoes from around the world.

Their study identified nearly 5,000 genes not present in the domesticated “Heinz 1706” tomato, which has served as the “reference genome” for tomatoes since 2012.

They also discovered a rare variant gene that enhances tomato flavor and found it was present in only 2 percent of the commercial tomatoes in markets today.

The variant gene uses carotenoids – pigments that give tomatoes their color – to produce the tangy flavor of the plant. It could also provide extra resistance to diseases, reducing the need for pesticides.

Scientists might finally be able to give commercial tomatoes a more natural taste, but some people might argue that the fruit – or vegetable – has been genetically modified.