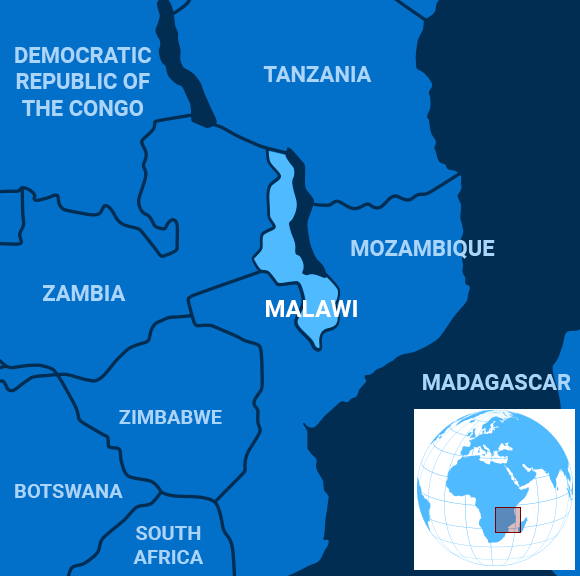 Bon Kalindo, a parliamentary candidate in Malawi, listed the ways albino body parts might be used to gain favor and fortune. As the Economist explained, he and other Malawians believe the “magnetic liquid” inside humans lacking pigmentation has magical properties.

Kalindo is superstitious. But ironically he’s also famous in Malawi for fighting the trade in albino body parts.

Still, magic might be his and others’ best chance of success.

The southeastern African country will vote for the president and members of parliament on May 21, and the presidential contest is a three-horse race that’s too close to call.

At the top of the ballot, President Peter Mutharika is seeking a second and final term. His vice president, Saulos Chilima, is looking to unseat him. Meanwhile, opposition leader Lazarus Chakwera is seeking a surprise win.

Former President Joyce Banda, who withdrew from the race in March, has endorsed Chakwera. Banda was a political foe of the incumbent’s brother, former President Bingu wa Mutharika, whom she succeeded after his death in 2012.

One of the three top candidates probably will triumph with less than 30 percent of the vote under the country’s first-past-the-post voting system, which doesn’t require the president to win the support of a majority of voters, according to African Arguments.

Corruption is the big issue on the campaign trail, particularly because Malawi can recall a time when it wasn’t so common.

Malawi was once the poster child for a better Africa. In 2009, or 15 years after ex-dictator Hastings Banda left office, the economy was improving and poverty had decreased.

Today, more than half the country is impoverished, only 11 percent of the population has access to electricity, and the primary industry, agriculture, is vulnerable to international market shocks.

Similarly, the award of a $4.6 million contract to a Dubai-based printer to produce ballots has raised questions, given how the company’s proposal was the highest of 13 bids, explained the Daily Maverick. The same company has been accused of cooperating with ruling parties in Zambia, Kenya and Uganda to secure excessive prices.

“Our first objective is to rid the public service of corruption,” said Chakwera at a rally covered by Reuters.

Mutharika has responded by touting his record of securing foreign aid, building infrastructure projects and subsidizing agriculture. He also wants to keep out most foreign business, killing off any chance for the country to get the foreign investment it needs, and depriving local consumers of the cheap Chinese goods many say they prefer, the Washington Times reported.

Whoever wins will face a raft of challenges that magical thinking won’t fix.

Off with a Bang

Ukraine’s incoming President Volodymyr Zelensky started off with a bang Monday, dissolving parliament and calling for snap elections in his inaugural address.

The 41-year-old comedian, who played an unlikely president on TV before becoming the actual one, rose to power by capitalizing on widespread discontent with the establishment. As a result, his maneuver is likely to go ahead even though there are questions over the legality of a president dissolving the legislature, Agence France-Presse reported.

“There are no mechanisms or instruments to stop this decision,” said analyst Mykola Davydchuk.

After calling the members of parliament “petty crooks,” Zelensky said, “People must come to power who will serve the public.”

Prime Minister Volodymyr Groysman said he would be resigning on Wednesday.

Apart from that surprise, Zelensky said his top priority was ending the war with Russia-backed separatists in the eastern Donbass part of the country. After that, the “next challenge is the return of the lost territories” including Crimea, which Russia annexed in 2014.

South Korea said Monday it would move rapidly to make $8 million worth of medical and nutritional aid available to North Korean children through the United Nations, even as Seoul considers direct food aid as a humanitarian gesture that might also jump-start faltering peace talks.

“The government will first discuss with international organizations over the provision of aid and take measures so that the support arrives (in North Korea) quickly,” said Lee Sang-min, spokesman for Seoul’s Unification Ministry, according to the Associated Press. “On the matter of direct aid, we will consider the matter while sufficiently garnering the opinions of our citizens.”

Last week, North Korean state media reported that the country is suffering its worst drought in decades even as it is already reeling from food shortages it blames in part on economic sanctions.

South Korean President Moon Jae-in has expressed hopes that aid will rekindle his North Korean counterpart Kim Jong-un’s enthusiasm for nuclear disarmament talks, which have sputtered after the failed February summit between Kim and US President Donald Trump.

Mexico’s President Andres Manuel Lopez Obrador aims to make good on his campaign promises to root out corruption and curb the violence that plagues the country by prosecuting judges who are in the pockets of powerful drug lords.

After the US issued sanctions against a Mexican judge and a former state governor on Friday for allegedly taking bribes from drug traffickers, the head of the finance ministry’s financial intelligence unit told Reuters that cases are underway against other judges suspected of working with the cartels.

“I have received instructions from the president of the republic to go after anybody regardless of their position or party loyalty,” Santiago Nieto said.

The US Treasury Department and Drug Enforcement Agency sanctioned Judge Isidro Avelar Gutierrez, whom they allege accepted bribes from the Jalisco New Generation Cartel and the Los Cuinis Drug Trafficking Organization in exchange for favorable rulings in cases involving their senior members.

Whether Nieto’s words will translate into actions remains to be seen.

History remembers the Roman Emperor Nero as a cruel tyrant with expensive taste.

During his reign, when the Great Fire of Rome in AD 64 destroyed a majority of the city, the young monarch used the opportunity to build a megacomplex that spanned more than 300 acres.

Known as the Domus Aurea, or “Golden House,” the palace currently remains in ruins, but it houses a few secrets, Science Alert reported.

Italian archaeologists recently discovered a secret room in the ancient complex, dubbed “the Sphinx Room,” that revealed more about the emperor’s lavish lifestyle.

“In the darkness for almost 20 centuries, the Sphinx Room … tells us about the atmosphere from the years of the principality of Nero,” said Alfonsina Russo, director of Parco archeologico del Colosseo.

The underground chamber is filled with murals depicting both real and mythical creatures – including a sphinx, which accounts for the room’s moniker.

Most of the room is buried under a lot of dirt, and archaeologists are hesitant to excavate it since it could destabilize the entire complex.

Historians and visitors might be awed today, but Nero’s successors were embarrassed by the majestic compound. After the tyrant’s suicide, they tried to remove traces of it, such as by building the famous Colosseum over parts of it.