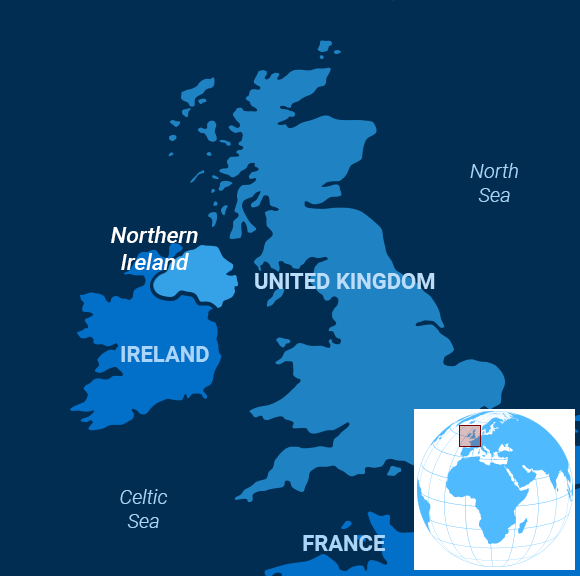 Time of the Banshees

In Irish folklore, the mournful wailing, or “keening,” of the banshee heralds the arrival of death. One might argue that much keening has been heard in Northern Ireland lately.

Police recently nabbed four men in connection with the fatal shooting of journalist Lyra McKee. The arrests came after a paramilitary group called the New Irish Republican Army took responsibility for McKee’s death, saying its members accidentally killed the 29-year-old reporter as she covered a riot where they were throwing petrol bombs and shooting at the police, the Associated Press reported.

McKee was a “cease-fire baby” who grew up without firsthand knowledge of the Troubles, the term for the violence between Catholics and Protestants that gripped Northern Ireland between the 1960s and 1998, when the Good Friday agreement was signed.

“The Belfast where McKee grew up is still largely segregated by religion and national aspiration, with Catholic nationalists on one side and Protestant unionists on the other,” wrote Boston Globe columnist Kevin Cullen. “But there is relative peace, and young people like her could realistically aspire to a shared island, where the living counted more than the dead.”

But the New IRA opposes the peace process. They’ve stepped up their activity as the Brexit crisis has raised questions about the Irish-British border in Northern Ireland, the Daily Beast explained.

That border is now open because both Ireland and the United Kingdom are members of the European Union, a situation that has helped quiet voices who insist on Northern Ireland joining the southern republic. When the UK quits the EU, however, the Brits might set up a “hard border” separating the two sides.

A month before McKee’s death, prosecutors in Northern Ireland charged a former British soldier in the shootings on so-called Bloody Sunday in 1972 that led to the deaths of 14 civil-rights demonstrators.

Some of the victims’ families were gratified by the charges, the Irish Times reported. Others were disappointed that only one soldier out of many would face justice. Some Northern Irish Protestant politicians and British lawmakers expressed outrage that a soldier would be penalized for actions committed while on duty.

Writing in the Guardian, Irish filmmaker Sinéad O’Shea argued that McKee’s death illustrated how old grudges die hard. The same could be said for the prosecution of the soldier, based on the reactions to the charges.

The keening of the banshees might be marking McKee’s passing. They might be lamenting the dead of Bloody Sunday activists who are only now seeing justice. Or the spirits might be mourning an old Irish dream that appears to have been more fiction than reality.

The British House of Commons will vote on Prime Minister Theresa May’s Brexit plan a fourth time on June 3, a Downing Street spokesman announced following a meeting between May and opposition Labour leader Jeremy Corbyn.

That means the vote will take place before parliament takes its summer recess and in the midst of US President Donald Trump’s planned visit to the country, CNN reported.

With little changed since the last vote, it’s highly unlikely this one will deliver a different result, the BBC reported. May would face a Conservative revolt were she to accept Labour’s minimum demand for a customs arrangement with the European Union, while Corbyn would see a similar reaction from Labour if there’s no guarantee of a second referendum.

Meanwhile, a committee of May’s most senior members of parliament is pressing her to set a date to step down. She could face a vote of no confidence from her own party in June. And polls are predicting that the big winner in the May 23 European parliament elections could be Nigel Farage’s Brexit party.

Brazil acknowledged that its economic and fiscal health is deteriorating rapidly following more discouraging data – this time from the service sector that represents nearly three-quarters of its economic activity.

The service sector shrank by 0.7 percent in March compared with a month earlier and 2.3 percent compared with March 2018, Reuters reported. Far worse than expected, the data is another indicator suggesting the South American country’s economy likely contracted in the first quarter.

Economy Minister Paulo Guedes said the government would cut its 2019 growth forecast to 1.5 percent from 2.2 percent, but the country could well be drifting toward recession, the agency suggested.

That makes passing the mammoth pension reform – which would save the exchequer over 1 trillion reais ($252 billion) over the next decade – more vital than ever. Some economists project that the pension overhaul and other business-friendly reforms could trigger a deluge of foreign investment – as much as $100 billion a year, Reuters reported separately.

Armed drones hit two oil-pumping stations in Saudi Arabia on Tuesday, two days after four oil tankers were allegedly damaged by saboteurs off the coast of the United Arab Emirates.

While the attack on the oil tankers was loosely attributed to Iran or its proxies, Saudi Arabia blamed Tuesday’s drone attack on the Iran-allied Houthi rebels fighting the Saudi-backed government for control over Yemen, the Washington Post reported.

By escalating tensions throughout the region, the two incidents could scupper efforts to end the civil war in Yemen just as a UN-brokered withdrawal from key ports had suggested some progress.

In this case, the Houthis announced they had launched seven drone attacks on Saudi targets on television shortly before the first explosions, which Saudi Energy Minister Khalid al-Falih condemned as an “act of terrorism and sabotage.”

Amid rising tensions between the US and Iran and growing Congressional opposition to the US support for the Saudi coalition in Yemen, Falih was also quick to link Tuesday’s attack to Tehran.

For the longest time, scientists have been trying to find an efficient way to turn salt water into drinkable water – a process known as desalination.

Desalination could help solve global water shortages and droughts, but the method has a downside: It also creates a heavily salty byproduct known as brine.

Brine is mostly used in preserving food, but when produced on an industrial level it can be very harmful to the environment and humans.

Known as “temperature swing solvent extraction” (TSSE), the process uses a solvent and lower temperatures than those required in traditional methods to desalinate extremely salty brine, removing up to 98.4 percent of the salt.

“Our results show that TSSE could be a disruptive technology – it’s effective, efficient, scalable, and can be sustainably powered,” study co-author Ngai Yin Yip said in a statement.

The research team hopes the new method will transform desalination plants around the world.

Globally, these plants discharge about 37 billion gallons of industrial brine back into the environment every day.

“We can eliminate the pollution problems from these brines and create cleaner, more useable water for our planet,” added Yip.