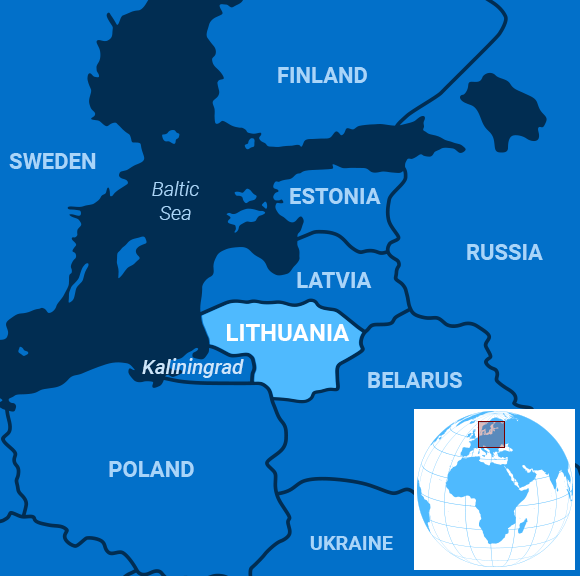 Fifteen years ago this month, Lithuania and seven other countries formerly under Soviet control joined the European Union.

The verdict on the fruits of EU accession since then is mixed, noted euronews. Europe has poured billions into Lithuania, improving infrastructure and boosting the economy relative to 2004. But wealth suppresses birth rates, and the lure of new opportunities in Berlin, London, Paris and elsewhere accelerated a brain drain that started in the 1990s. The tiny Baltic country’s population shrank by more than 20 percent since then.

This climate has set the stage for a nail-biter of a presidential election in Lithuania on May 12, reported the Baltic News Network.

Nauseda and Skvernelis have blasted Simonyte for not taking an International Monetary Fund bailout, then slashing pensions and government spending, when she was the government’s economic point person during the global financial crisis of 2008.

She’s waived off those criticisms, however. “Anyone can think they’d have performed miracles (in hindsight),” she said in response to that criticism, reported Bloomberg.

Simonyte and Skvernelis, meanwhile, have blasted Nauseda for publicly suggesting in 2008 that Lithuanians invest in real estate. Property values have still not rebounded from the crisis.

A former police officer, Skvernelis once appealed to Lithuanians who sought a firm hand in politics. But he has stumbled on foreign policy issues, particularly regarding Russia, whose influence looms large over every policy question in Lithuania.

Recently, for example, a court in Vilnius found former Soviet Defense Minister Dmitry Yazov, 94, and other officers guilty in absentia for war crimes related to a 1991 crackdown on pro-independence demonstrators in the country, Reuters reported. Russia denounced the trial and has opened an investigation into the Lithuanian judges.

The candidates will be battling over those issues until the polls close. Voters might take a moment to give thanks that their democracy is still strong. They have come a long way in 15 years.

The African National Congress will retain power in South Africa, but support for the party that led the country out of Apartheid is waning, preliminary results from this week’s parliamentary election showed Thursday.

With the votes from more than half the districts counted, the ANC had won a healthy 57 percent of the ballots, Agence France-Presse reported. Its closest challenger, the main opposition Democratic Alliance (DA), had managed only 22 percent.

Reports from 90 percent of the voting districts were expected to roll in by the end of the day Thursday, and the final results are expected to be officially certified on Saturday, the agency added.

The party of anti-Apartheid crusader Nelson Mandela, the ANC has ruled South Africa since 1994, but its vote share in elections has fallen consistently since 2004. It won 62 percent of the ballots in 2014’s national vote.

Along with resentment of the corruption associated with former ANC President Jacob Zuma, South Africans are disillusioned by the party’s failure to make more headway against inequality.

A Bark, A Bite

The US seized a North Korean cargo ship Thursday in a first-of-its-kind effort to enforce its economic sanctions on Pyongyang, even as tensions rise once again between the two countries.

US officials announced the seizure of the ship, the “Wise Honest,” just hours after North Korea fired two suspected short-range missiles toward the sea, the Associated Press reported.

The second weapons launch in five days, it’s being read as a message from North Korean leader Kim Jong-un that he’s willing to scuttle disarmament talks with Washington if the US doesn’t offer some wiggle room on sanctions.

Meanwhile, the seizure of the “sanctions-busting” Wise Honest signals that the US aims to push even harder to enforce them, as the ship was purportedly used to transport coal to China, Russia and other countries – an important source of revenue for the North.

Now, South Korea’s military is working with the US to determine exactly what missiles the North test-fired on Thursday, an investigation that could be crucial because if they’re shown to have been ballistic missiles that would trigger fresh sanctions rather than the relief Kim has been seeking.

See You in Court

Belizeans voted to let the International Court of Justice (ICJ) in The Hague settle Belize’s territorial dispute with Guatemala on Wednesday, paving the way for the resolution of a conflict that has simmered for centuries.

According to results published by Belize’s elections and boundaries department on Thursday, 55.4 percent of voters opted to send the matter to the United Nations world court, while 44.6 percent voted against the motion, Reuters reported.

In a similar referendum last year, Guatemalans also voted in favor of resolving the dispute at the ICJ. A British colony until 1981, Belize was recognized as an independent nation by Guatemala in the 1990s. But the two countries never agreed on their borders, and Guatemala continues to lay claim to about half the territory others call Belize.

Norwegian fishermen recently had a strange encounter with a beluga whale that was nudging their boats in the Arctic Ocean.

On close inspection, they discovered that the marine mammal was wearing a harness with mounts for cameras, and might have been “spying” for Russia, CBS News reported.

“The whale seemed playful, but our instincts said that it was also asking for help to get out of the harness,” Jorgen Ree Wiig, a marine biologist with Norway’s Directorate of Fisheries, told CNN.

A team from the directorate removed the harness, which had a logo reading “Equipment St. Petersburg” in English.

Norwegian officials can’t exactly tie the poor creature to Russia but they speculate that the animal was trained by the Russian military.

“If this whale comes from Russia … then it is not Russian scientists, but rather the navy that has done this,” said Martin Biuw of the Institute of Marine Research in Norway.

Since the Cold War, Russia has trained sea mammals, including dolphins and whales, for scouting and weapon-detecting missions. It’s not the only country that has tried to weaponize animals including cats, bats and insects: The United States actually spearheaded the use of sea mammals for military purposes in the 1950s, the Washington Post reported.

Moscow hasn’t commented on the incident, but Russian naval analyst Mikhail Barabanov denied that the military would use belugas and release them in the open sea.

“I think that these Norwegian idiots simply robbed certain Petersburg zoologists” who were trying to track whales, he told the Associated Press.

The whale seems to like Norwegians, though: It has taken up residence in a local harbor and doesn’t want to leave. It likes being petted, too, and that’s because lone belugas need to fulfill the need for social companionship, Catherine Kinsman, co-founder of the Canadian Whale Stewardship Project told the Washington Post.

Due to a technical error, we were unable to insert the map feature along with our Libya item as usual in Thursday’s edition of DailyChatter. It is now restored and available here. We apologize for any inconvenience.