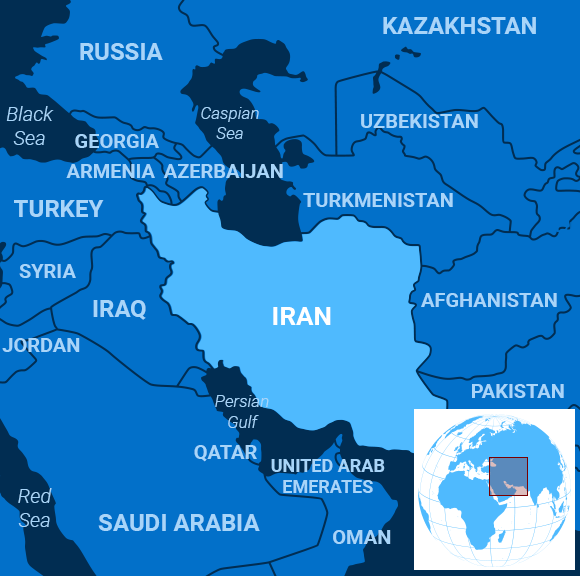 Iranian drivers recently lined up at gas stations as rumors flew that fuel rationing would go into effect amid rising prices – inflation approaching 40 percent – and a plunge in Iran’s currency stemming from crippling US sanctions on the country’s oil exports.

The development, covered by Radio Free Europe/Radio Liberty, was ironic for Americans who remember the queues at gas stations during OPEC’s oil embargo against the US in the 1970s.

Like America then, Iran is in recession now, the BBC reported. People are angry.

“Every day when I go shopping, I think yesterday I was better off than today,” a 48-year-old housewife named Maryam told the Financial Times. “I wake up every morning and realize there has been a jump in the price of chicken or a doubling in the price of onions and tomatoes.”

The slowdown is putting the country’s already embattled political system under enormous pressure. Reformers like President Hassan Rouhani are emboldened. The Islamic republic’s conservative leaders are girding to reassert their power. Meanwhile, the Pentagon dispatched the U.S.S. Lincoln aircraft carrier task force and a bomber group to the region Monday, following “indications of heightened Iranian readiness to conduct offensive operations against US forces and our interests,” said Pentagon spokesman Charles Summers, according to USA Today.

One can see the push and pull between those forces in the culture wars raging in Iran. Censors recently pulled an enormously popular movie from theaters, saying screeners had restored cut scenes with “explicit sexually loaded dialogue.” At the same time, a woman sentenced to a year in jail for the crime of removing her mandatory headscarf in public was recently pardoned.

Yet both Rouhani and the hardliners face a Catch-22, wrote Nikolay Kozhanov, a visiting scholar at the Gulf Studies Center of Qatar University, in Al Jazeera. Government spending is usually the solution to, or at least a way to mitigate, economic crises.

But the Iranian state spends too lavishly on social programs, Kozhanov argued, which it deems crucial to keeping citizens loyal to the Islamic revolution of 1979, when Ayatollah Khomeini promised to help the poorest among his followers. A drop-off in that spending will erode the system Rouhani wants to reform and the hardliners want to retain.

Michael Rubin, an analyst at the right-leaning American Enterprise Institute, opined in the Washington Post that the US should support labor unions in Iran, which represent one of the few independent power centers in the country and have had a history of successfully challenging the mullahs.

Rubin compared Iran’s labor organizers to Lech Walesa, the Polish shipbuilder and labor activist who led the fight against Poland’s pro-Soviet government at the end of the Cold War.

Is Iran on the brink of collapse? The possibility might just be wishful thinking in Washington. Iranians are suffering, though, and suffering people often rise up.

Turkey’s national election board canceled the results of the Istanbul mayoral elections in which President Recep Tayyip Erdogan’s party was defeated and ordered a do-over, raising an outcry from the election winner.

The ruling canceled the mandate of Ekrem Imamoglu, the Republican People’s Party (CHP) leader who had been sworn in as Istanbul mayor, and slated a new vote for June 23, the Wall Street Journal reported.

Ruling on a complaint lodged by Erdogan’s Justice and Development Party (AKP) the election board claimed a new vote was needed because the first one was marred by fraud and irregularities. But opposition leaders suggested the only reason for the repeat was that Erdogan didn’t like the results.

When the results of the March 31 elections came out, many observers said the poor showing by Erdogan’s AKP signaled that he may no longer be politically invulnerable.

Now, the new election raises the specter of a potentially brutal confrontation between an increasingly authoritarian president and an emboldened opposition, the Journal noted.

Running with the Polls

Three separate Madrid courts ruled that former Catalan President Carles Puigdemont and two other Catalan separatist politicians can run for election to the European Parliament this month, even though they have not returned from self-imposed exile.

Puigdemont, Toni Comín and Clara Ponsatí all fled Spain in 2017 after Madrid squashed the Catalan separatist effort and moved to prosecute them for the abuse of public funds and “rebellion” related to an unsanctioned and disputed independence referendum in which 90 percent of voters backed splitting from Spain, the BBC reported.

Puigdemont cheered the ruling via Twitter. But it’s not clear if the three candidates – who face the threat of arrest in Spain – could assume office were they to win. They would have to return home to be sworn in, and their parliamentary immunity would only take effect after their confirmation.

The government of Namibia declared a national emergency in response to what has been described as the worst drought to hit Africa since 1945.

“Offices, Ministries and Agencies and all other stakeholders will be mobilized to ensure that the necessary assistance is rolled out to affected communities,” said a government statement attributed to President Hage Geingob, according to Africanews.com.

As part of the government’s relief efforts, it will give marketing incentives to farmers who want to sell stock to reduce the size of their herds, offering subsidies ranging from N$80 to N$400 – about $5.50 to $27.65 – a head. It also aims to provide water tankers to around 10,000 families.

Across Africa, drought has put millions of people at risk of famine for the past few years, especially in Somalia, South Sudan and Nigeria. It hit southern Africa last year and has particularly affected Lesotho, Madagascar, Malawi, Mozambique, Namibia, South Africa, Swaziland, Tanzania, Zambia and Zimbabwe.

Spiders are important to the ecosystem and help in controlling other pests, but their appearance and reputation terrify many people.

Adding to that is that even though spiders lack wings, some are capable of long-distance “flights,” National Geographic reported.

Some species can float in the air for thousands of miles by using their silk and taking advantage of the electric field between the Earth’s surface and atmosphere.

The process, known as “ballooning,” is a bit tedious: The spider secures itself with an anchor silk on a spot where the Earth’s electric field is strongest, and uses its front limbs to sense the wind and electrical conditions in the atmosphere – basically a built-in a weather system.

Once conditions are optimal, the spider raises its abdomen and shoots silk strands into the air, which float up and repel away from one another because they’re all negatively charged – similar to how hair stands up when people rub balloons on their heads.

The arachnid then breaks its anchor and is swept up by the wind and the oppositely charged atmosphere. Once aloft, it uses its legs to navigate the skies, and probably land on unsuspecting victims.

Scientists are still perplexed at this innate ability, but for arachnophobes, it’s one more thing to fear.