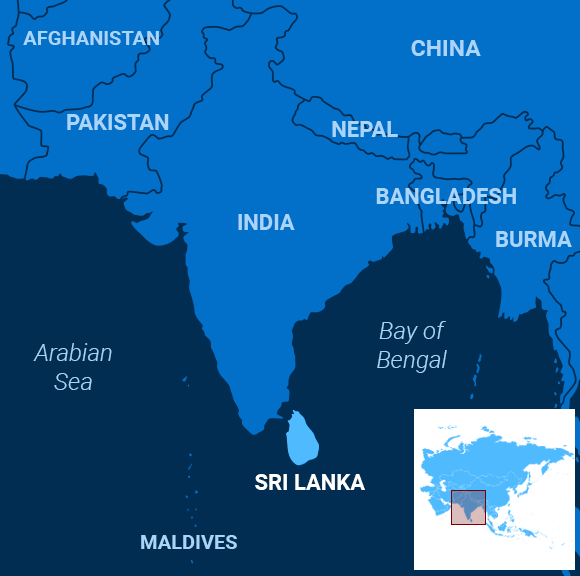 Sri Lankan security forces engaged in shootouts with Islamic State-affiliated militants recently as they searched for 140 suspects linked to the suicide bombings that killed more than 250 people at churches and hotels on Easter Sunday.

Much of the fallout from the attacks followed a script that unfortunately has become common among large-scale terror attacks in the past few decades.

One of the groups blamed for the bombings, the National Towheed Jamaat, was a formerly little-known terror cell in the island nation off the southern coast of India. Sri Lankan security officials had received warnings about the group, but failed to act on that intelligence, the Independent wrote.

Those revelations prompted the defense minister and others to resign in disgrace while other politicians went into damage-control mode. “If we had any inkling, and we had not taken action, I would have handed in my resignation immediately,” Prime Minister Ranil Wickremesinghe told the BBC. “But what do you do when you are out of the loop?”

Observers, meanwhile, began picking apart the government’s response. Officials initially said the death toll was 359, and then revised that number down to 253, for example.

“It speaks to a dysfunctional system where information is not being shared, not being cross-checked,” Australian terrorism expert Greg Barton told the Associated Press. “If you can’t count the dead, how can you take care of the living, especially those who pose a threat?”

On Wednesday, Sri Lankan authorities released the names and photos of all nine people they believe carried out the coordinated suicide bombings, the Washington Post reported.

Terrorism in Sri Lanka has a special valence, compared to New York or London or, on the other side of the spectrum, Baghdad or Damascus.

The Easter Sunday bombings evoked the religious violence that was common in the country during the nearly 30-year-long civil war that ended in 2009, the Atlantic explained. That civil war pitted the central government against a Tamil separatist group whose members were mostly Hindu.

Seventy percent of Sri Lankans are Buddhist. About 12.5 percent are Hindu, while 10 percent are Muslim and 7 percent are Christian.

Many Sri Lankans thought they had put religious internecine hatred behind them. But, as the Associated Press and Israel Hayom reported, the instability of the civil war and the global jihad of Islamic terrorists made elements of the country’s Muslim community vulnerable to radicalization. In hindsight, it makes sense that Muslim extremists, at least from their perspective, would target adherents of the Western religion of Christianity.

Writing in the Toronto-based Globe and Mail, Brahma Chellaney, a professor of strategic studies at the Center for Policy Research in New Delhi, argued that such conditions are also extant in other Asian countries.

The world has been warned.

The May Day rally in Paris turned violent, as protesters smashed shop windows and threw rocks at a police station. But a heavy police presence successfully prevented the rally from degenerating into chaos, as had been feared might happen.

A Paris media consortium said as many as 40,000 people turned out for the pro-labor celebrations, while the Paris police pegged the number closer to 28,000, the New York Times reported.

Before the broken glass had been swept from the streets, around 200 demonstrators had been arrested.

Earlier, French authorities feared that the rally would provide a platform for the Yellow Vest protesters to take over the city as they managed to do last fall, or for leftist radicals of the so-called Black Bloc to turn Paris into Europe’s “Riot Capital” – as some activists exhorted on social media.

That didn’t happen. But across the country, more than 150,000 people took to the streets – a bad sign for President Emmanuel Macron’s recent efforts to appease the Yellow Vests.

Thailand’s King Maha Vajiralongkorn married the deputy head of his personal guard force in a surprise wedding on Wednesday, just days ahead of his coronation.

The bride’s new title will be Queen Suthida, Reuters reported.

The news was carried in the Royal Gazette and footage of the wedding was later shown on the Royal News segment that appears nightly on all Thai TV channels.

Vajiralongkorn, 66, also known by the title King Rama X, has been Thailand’s constitutional monarch since the death of his father, King Bhumibol Adulyadej, in October 2016. But his coronation is set to take place Saturday, following the end of the mourning period for King Bhumibol.

Vajiralongkorn had appointed the woman who is now the queen, Suthida Tidjai, as a deputy commander of his bodyguard unit in 2017, after making her a full general in the army the year before as well as granting her a noble title. Earlier, she had been a flight attendant with Thai Airways.

Though the romance was suspected, the palace had never acknowledged a relationship between the couple.

The African Union granted Sudan’s military leaders an additional 60 days to hand over power to a civilian authority or face suspension, after their previous deadline whooshed by, seemingly unnoticed.

Noting “with deep regret” that its April 15 ultimatum that the military council relinquish power by the end of April had been ignored, the bloc issued a more generous one and reiterated “its conviction that a military-led transition in the Sudan will be totally unacceptable,” Al Jazeera reported.

The military council that assumed power after ousting longtime leader Omar al-Bashir in the wake of months of anti-government protests initially promised to hold elections within two years. But the protesters have rejected that plan and are pushing for immediate civilian rule.

They’ve called for more rallies and a nationwide strike on Thursday, while the military has warned against further chaos and demanded the protesters clear the roadblocks from around the army headquarters in the capital of Khartoum.

Return of the King

Archaeologists recently rediscovered the skeletal remains of a giant carnivore that had lain inside a drawer at the National Museums of Kenya for decades.

After a thorough study, they reported that the fossils belonged to a new species that was larger than modern-day lions and polar bears, making it one of the largest carnivorous mammals ever to live on land, according to CNN.

Dubbed Simbakubwa kutokaafrika, which stands for “big lion coming from Africa” in Swahili, the large mammal was at the top of the food chain about 23 million years ago.

Researchers estimate that it had teeth that could rip flesh and crack bones, weighed about 1.6 tons and hunted large herbivores similar to today’s elephants and hippopotamuses.

Although referred to as an “ancient lion,” the new species is not closely related to today’s lions and other big cats. It belongs to an extinct group of mammals known as hyaenodonts that ruled sub-Saharan Africa for 45 million years.

Scientists speculate that climate change led to their demise, leaving the throne open for a new regent.

Today, the lion may be the king of the wild but millions of years ago, it wouldn’t stand a chance against this larger and more ferocious predator.