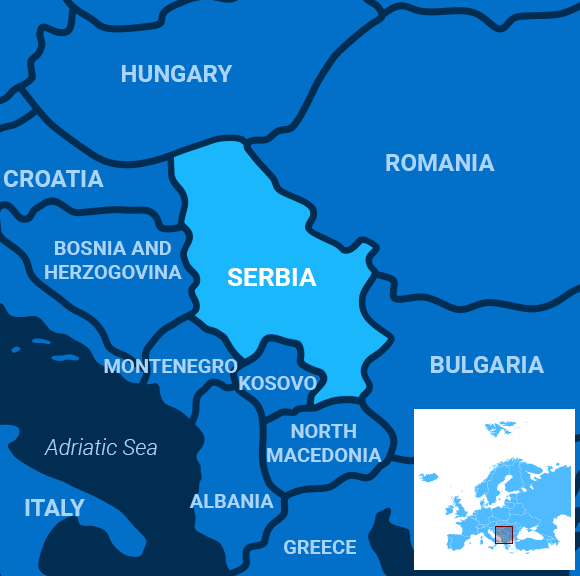 A Rock, A Hard Place

Thousands of Serbians have been staging protests outside their parliament in Belgrade since masked thugs beat up an opposition politician in November, an incident that protesters say underscores and perfectly illustrates the autocratic rule of President Aleksandar Vucic.

The protesters are calling on Vucic, a former associate of the late Serbian leader and accused war criminal Slobodan Milosevic, to uphold democracy and media freedoms, to crack down on corruption and to ensure free elections, the Associated Press reported.

But Vucic has dismissed their demands, saying the protesters want to take power by force – even though their demonstrations have been peaceful.

Bolstering his position, thousands of Serbians staged a pro-Vucic rally recently, Reuters reported. Many at the rally were paid to attend, noted BalkanInsight, a local investigative publication.

On first blush, the dispute appears to be a repeat of the clashes that have occurred throughout Central and Eastern Europe in recent years. Vucic has long been close to Russia, Serbia’s traditional ally. One would presume his rivals want closer ties with the European Union. That’s not exactly the dynamic, though.

Anti-Vucic protesters have called on European leaders to stop supporting Vucic, who is seeking to bring a resolution to the question of Kosovo, the former Serbian province whose citizens are largely ethnic Albanians. Kosovo declared its independence from Serbia in 2008, but Serbia refuses to recognize that move.

Vucic wants Serbia to join the EU. Kosovo also wants to join the bloc. But the EU has said neither can join until they reconcile their differences. European leaders have therefore supported Vucic, who appears to be serious about ending the Kosovo drama. On Monday, German Chancellor Angela Merkel and French President Emmanuel Macron held lengthy talks with both sides in Berlin, the Washington Post reported, but they made no progress apart from preventing an escalation of tensions.

The president’s critics belong to both sides of the political spectrum, from nationalists who want Serbia to retain close relations with Russia to left-wing intellectuals who want to improve Serbian democracy, Deutsche Welle explained.

Vucic is in a pickle. He can’t snub Serbia’s traditional ally, Russia. That close relationship is showing signs of strain, however, as other former Yugoslav republics gain from working with the West, argued Maxim Samorukov, deputy editor at the Carnegie Moscow Center, a think tank.

Montenegro joined NATO two years ago. Bosnia is on track to join the alliance. European diplomats helped broker a deal between North Macedonia and Greece to help the former country join NATO and the EU.

Serbia, meanwhile, can’t recognize Russia’s annexation of the Crimean peninsula from Ukraine because that recognition would set a bad precedent for breakaway regions like Kosovo, the Russian news agency Tass reported.

Many protesters and Vucic appear to be arguing more over how he operates than the goals he’s seeking to achieve. He might consider placating some of his critics to achieve a diplomatic victory that would secure his place in history.

The leader of the Islamic State praised the Easter bombings in Sri Lanka and said the attacks were revenge for the fall of Baghouz, Syria, the terror group’s last stronghold, in his first video appearance in five years.

In the video, Abu Bakr al-Baghdadi called on Islamist militants in the South Asian island nation to be “a thorn in the chests of the crusaders,” the Associated Press reported, adding that some of the audio suggests the footage may have been recorded before the attacks.

“It’s interesting that after five years he’s finally decided to show his face. I think it’s a recognition that things aren’t going well for Islamic State,” said Bill Roggio, a counterterrorism analyst with the Foundation for Defense of Democracies think tank, according to the Washington Times. “It’s an attempt to rally the troops because the recent Sri Lanka attack was really big for the Islamic State and I think al-Baghdadi definitely wanted to … highlight the success of the operation.”

Thousands of Czech protesters rallied against the appointment of Marie Benesova as the country’s next justice minister on Tuesday, spurred by widespread suspicion she was handpicked to interfere with an ongoing criminal case against billionaire Prime Minister Andrej Babis.

President Milos Zeman is set to appoint Benesova following the resignation of her predecessor, sparking claims from opposition leaders that Babis’ supporters are seeking to influence or scuttle a potential fraud trial related to European Union subsidies, Reuters reported.

Babis has denied any wrongdoing and claimed the case is politically motivated, but police said on April 17 that he should stand trial for the alleged fraud, which involved a 2 million euro ($2.24 million) EU subsidy and could result in a jail term of as long as 10 years.

Despite the investigation, Babis’ ANO party still has the approval of most Czechs, after it trounced all rivals in the 2017 election. But protests were held in more than 100 locations across the country and saw estimated crowds of 10,000 in Prague and 3,000 in Brno, the country’s second-largest city, the agency said.

In a bid to strengthen his position, Afghan President Ashraf Ghani opened a Loya Jirga, or grand assembly of tribal elders, to discuss the US-Taliban peace talks from which his government has been excluded. But it got off to a shaky start Monday.

Around 3,200 tribal elders and community and religious leaders from all 34 Afghan provinces are attending the four-day conference, the first such assembly since 2013, Deutsche Welle reported.

But the Taliban, who have dismissed Ghani as a US puppet and insisted his representatives be excluded from the peace talks, have also skipped the event and urged others to boycott it. And critics like former President Hamid Karzai have given it a miss and accused Ghani of abusing the respected tradition to bolster his status in the lead-up to elections slated for September.

Considering his growing isolation, that may not be a bad gamble, analysts say. But it could also be an all-or-nothing bet, as failing to win the support of the Loya Jirga could all-but finish his presidency.

During the Cold War, the United States used U-2 spy planes to snap high-resolution photos of military installations over the Middle East, Eastern Europe and the Soviet Union from 70,000 feet above ground.

After these photos were declassified in 1997, archaeologists discovered that most of them contain a myriad of visual information about ancient sites and structures in the Middle East, NBC News reported.

In a recent study, researchers cataloged pictures from 11 U-2 reconnaissance missions during the 1950s and 1960s, converting them to digital formats and recreating the planes’ flight paths. They also built an index.

“There was no way to search by keyword or anything, much less figure out what photos might cover a particular area that you’re interested in,” said study co-author Emily Hammer.

The team studied detailed images of ancient villages and irrigation canals in southern Iraq, but also old photos of areas that are now inaccessible and ravaged by conflict, such as Aleppo, in Syria.

There are more unreleased photos, but Hammer hopes that these snaps can help archaeologists monitor and record sites that don’t exist anymore.

“It’s not just about the deep past, but it’s also about accessing something that was very recently there but is no longer,” she added.

In Syria and Iraq, locals sometimes fight to save such antiquities, while waiting for the day the wars are over to rebuild, restore their heritage, and ours.