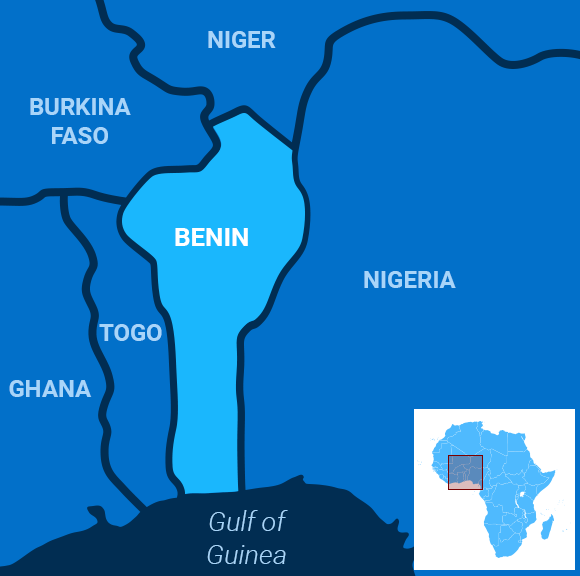 Of Gizzards and Threats

History has not been kind to Benin.

The tiny West African country exported more than a million slaves to the United States and elsewhere centuries ago. On the country’s coast stands the Door of No Return, a moving memorial at the port where slaves once embarked on the torturous Middle Passage.

After gaining independence from France in the 1960s, Benin struggled through military coups and authoritarianism. In 1991, democracy emerged. Voters twice re-elected former dictator Mathieu Kérékou, but the political system nonetheless thrived. In the last parliamentary election four years ago, voters could choose between 20 parties.

Sadly, that democracy is now under threat.

Citing technicalities under new reforms, election officials recently ruled that only two parties can run in parliamentary elections on April 28, reported the Mail & Guardian, a South African newspaper. Both parties happen to be allied to President Patrice Talon, a cotton and shipping tycoon. No opposition candidates are standing for office.

Protests have flared up, but security forces have quashed them. Talon stationed troops, paramilitary forces and military vehicles throughout the country, including around the headquarters of the opposition Benin Rebirth Party.

The military is not the only way Talon appears to be consolidating power. Last month, the Tanzania-based African Court on Human and Peoples’ Rights ruled that Benin mistreated former presidential candidate Sebastien Ajavon, a poultry magnate who lost to Talon in 2016.

As Bloomberg explained, after Ajavon lost the election, authorities found 40 pounds of cocaine in a shipping container of imported turkey gizzards in one of his companies and charged him with drug trafficking. He claimed he was being framed and now lives in exile in France.

Those moves led critics to charge that Talon was planning a power grab. “Talon’s plan is to revise the constitution as he pleases,” said Corneille Nonhemi, a young activist who had wanted to run for parliament as a candidate under Ajavon’s Social Liberal Union.

Talon countered that the new election rules were designed to encourage around 250 opposition parties to coalesce into two or three groups.

Former President Thomas Boni Yayi, who backed Ajavon in 2016, has called on Talon to postpone the election, wrote Agence France-Presse.

Beninese opposition leaders have also called on Nigerian President Muhammadu Buhari, the current chairman of the Economic Community of West African States, to intervene. “Nigeria has over 800 kilometers (of) land border with Benin Republic and principally stands to suffer the consequences of any political instability in Benin,” Jean Adèkambi, a leader in a coalition of opposition groups, said in the Nation, a Nigerian newspaper.

Hopefully, foreign military intervention won’t be necessary. Sometimes, as in The Gambia, the threat is enough.

Sri Lanka lowered the official death toll of the Easter Sunday terrorist attacks by nearly a third even as it fears another possible incident, according to an unusually specific warning about potential attacks on places of worship this weekend from the US embassy there.

Health ministry official Dr. Anil Jasinghe said that reduction in the number of victims – from 359 to 253 – occurred because some bodies had been too badly damaged for identification, the Associated Press reported.

Religious leaders canceled public prayer gatherings in response to the warning of fresh attacks, while Prime Minister Ranil Wickremesinghe told AP in a separate interview that suspects linked to the coordinated bombings remain at large despite the arrests of about 58 people. They could carry out more suicide attacks, he added.

Sri Lanka has blamed a local Muslim militant group, National Towheed Jamaat, for the bombings, though the Islamic State has claimed responsibility. Authorities also arrested the father of two of the suspected suicide bombers, Mohammad Yusuf Ibrahim, one of Sri Lanka’s wealthiest spice traders, but his complicity is still in doubt, according to the prime minister.

French President Emmanuel Macron pledged tax cuts, higher pensions and parliamentary reform in a speech intended to convince the so-called “yellow vest” protesters to stand down, but he insisted the government had not made a “wrong turn” with its broader package of reforms.

His plans include $5.6 billion in income tax cuts financed by closing loopholes for corporations and slashing government spending, the reintroduction of a policy that adjusts some pensions for inflation, extending proportional representation in elections and making referendums easier to hold, among other measures, the BBC reported.

Developed after hundreds of national debates held with French citizens across the country, the new proposals acknowledge that the protesters – who started off decrying green taxes that hiked fuel prices but soon launched a national uprising against rising inequality – had some “fair demands,” in Macron’s words.

The new measures will come on top of a government bonus for low-paid workers and other reforms announced in December at a cost of around $11 billion. Meanwhile, the protesters vowed to continue protesting, Al Jazeera reported.

US-Mexico relations may have taken a bumpy course over the past few years over immigration but bilateral trade between the two neighbors has been soaring, suggesting Mexico could soon become the largest foreign market for American goods.

Those numbers could seesaw – especially as Mexican business has benefited from the hardball tariffs on Chinese goods introduced by the Trump administration even as the same measures reduced US-China trade. But with the finalizing of the US-Mexico-Canada Agreement (USMCA) to replace the North American Free Trade Agreement (NAFTA), the economies of the two countries are likely to become more integrated, according to analysts.

For Luis de la Calle, a former undersecretary of the economy in Mexico, the latest numbers signal a natural course.

Homo sapiens shared the world with other early human species before becoming the dominant one.

Archaeologists recently discovered the remains of a completely new hominin species in a cave on Luzon, the largest island in the Philippines, Science Magazine reported.

The new species – named Homo luzonensis – lived about 50,000 to 80,000 years ago, when the world hosted other extinct members of the human family, such as Neanderthals and Denisovans. At this time, Homo sapiens was making its way to Southeast Asia.

Researchers reported in their study that the newfound early humans had curved fingers and toes, suggesting that they were well adapted for both walking upright and climbing trees – similar to “Lucy,” the most famous early human ancestor.

Teeth from the new find suggest that H. luzonensis was tiny in stature. That matches another unusual extinct human discovered in the region: the small-sized Homo floresiensis – also known as the “hobbit” – found on the island of Flores, in Indonesia.

Some anthropologists speculate that these two distinct species reveal that Southeast Asian islands were cradles of diversity for ancient humans.

But others aren’t convinced that the new discoveries are sufficient to make the case for a new species.

“I see what they’re saying, but at the same time, I want more,” said paleoanthropologist Susan Antón, who was not involved in the study.