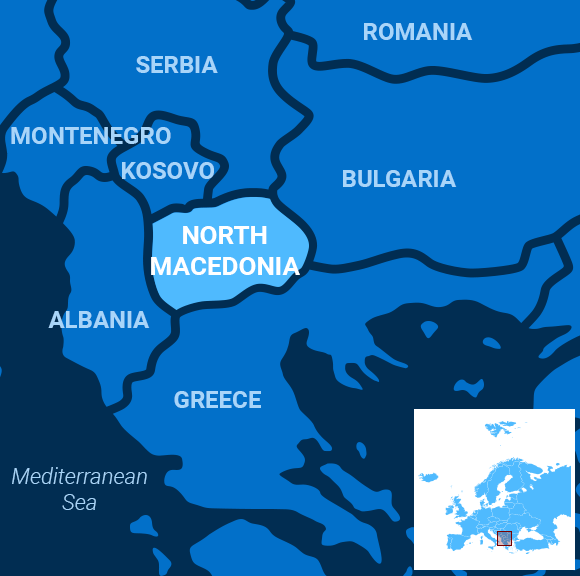 North Macedonia Prime Minister Zoran Zaev and his Greek counterpart Alexis Tsipras took a selfie when they met in Skopje earlier this month.

As the Washington Post reported, the photo commemorated the successful deal the two men struck last year that resulted in the Republic of Macedonia changing its name in exchange for Greece lifting objections to the ex-Yugoslav republic entering NATO and the European Union.

The name issue had been a source of dispute since the early 1990s. Greece wanted to forestall any possibility of its neighbor harboring designs on the northern Greek province of the same name.

“You are looking at two neighbors, friendly people who have shown Europe and the entire world that with brave decisions and good wishes for togetherness, something that was impossible yesterday has become reality today,” said Zaev in a press conference with Tsipras covered by Ekathimerini, a Greek newspaper.

First on the agenda is a presidential election slated for April 21. The North Macedonian presidency is largely ceremonial but the stakes are high.

Gordana Siljanovska-Davkova, the candidate of the opposition Internal Macedonian Revolutionary Organization-Democratic Party for Macedonian National Unity, or VMRO-DPMNE, opposed the name change. If she wins office, she will have a bully pulpit where she can hammer the deal, cautioned the European Council on Foreign Relations.

But the VMRO-DPMNE is compromised. The party’s former standard-bearer, ex-Prime Minister Nikola Gruevski, fled the country last year after he was convicted on corruption charges. Hungarian officials helped spirit him out of the country and gave him asylum, the BBC explained.

Hungary’s intervention is interesting. Even though the country is a member of the European Union, its prime minister, Viktor Orban, is a pseudo-ally of Russia, and a thorn in the side of the bloc. Providing safe haven to Gruevski, a critic of the Greek-North Macedonian name agreement, could complicate Zaev’s goals.

Zaev hopes his country will join NATO before the end of the year, a move that would solidify its security against Russian aggression. “It is quite a privilege to finally be around the table,” North Macedonian Foreign Minister Nikola Dimitrov told Foreign Policy. “Those on the inside forget how cold it is outside.”

Joining the EU might be more difficult, wrote Balkan Insight. At a time when Britons are figuring out how to exit the EU and many Europeans are questioning the bloc’s usefulness, expanding in the relatively poor and unstable Balkans might be politically unpalatable for leaders in Brussels, Paris and Berlin.

Still, North Macedonia is making progress. Democracy might complicate matters, but, happily, it always has and always will.

North Korea said it had tested a new kind of “tactical guided weapon” and demanded that Washington remove Secretary of State Mike Pompeo from peace talks.

The calibrated test – believed to feature a missile type unlikely to scuttle nuclear negotiations with the US – allows Pyongyang to ease the concerns of military officials who might see Kim Jong-un’s peace talks with US President Donald Trump as a sign of weakness without slamming any doors on the US, the Associated Press reported.

But both the demand that Pompeo be removed from the negotiations and the test – the first in nearly six months – illustrate the Hermit Kingdom’s frustration with the frozen negotiations. While the US insists North Korea must demonstrate significant efforts to dismantle its nuclear program before talks can move forward, last week Kim said he is open to a third summit with Trump, but only if the United States changes its stance on sanctions enforcement and eases pressure by the end of the year.

France on Thursday refuted claims by the internationally recognized government of Libya that Paris had thrown its support behind Khalifa Haftar – the military leader whose Libyan National Army (LNA) is fighting to take over Tripoli.

Earlier, the Libyan interior ministry said it had suspended relations between the ministry and the French due to the position of the French government in support of the “criminal” Haftar, France 24 reported.

A French foreign ministry official called the accusations “disappointing” and “completely unfounded,” while the French presidency said in a statement that it supported Libya’s internationally recognized government under Prime Minister Fayez Sarraj and was in favor of a political solution to the conflict.

While France has supported Sarraj’s Tripoli government in the past, there may also be a pragmatic interest in Haftar – who enjoys the support of Egypt, Saudi Arabia and the United Arab Emirates because they see the general as a bulwark against Islamist militancy.

Meanwhile, the battle for Tripoli rages on, with the death toll now reaching 205 after two weeks of fighting, the World Health Organization said.

Mali’s prime minister and entire government resigned on Thursday, a month after the massacre of an estimated 160 Fulani herders by an ethnic vigilante group, and following the largest protests in decades.

A statement from the president’s office accepting the resignation provided no explanation as to why Prime Minister Soumeylou Boubeye Maiga was stepping down, but the move came a day after legislators mulled a no-confidence motion in response to the government’s failure to stop ethnic militias and Islamist militants, Reuters reported.

Malian authorities have detained five people suspected of taking part in the massacre. Even so, Maiga and President Ibrahim Boubacar Keita have failed to disarm the militia that many believe organized it in spite of promises to do so.

On March 23, men believed to be from the ethnic Dogon hunter community massacred ethnic Fulani herders in the central Mali village of Ogossagou, following a jihadist attack on an army post claimed by an al Qaeda affiliate that includes many Fulani members.

Mali has for years struggled with internal fighting and terrorism. The deteriorating political situation now jeopardizes reforms the government had pledged to implement this year – a process key to the country’s stability – including the agreement for peace and national reconciliation, South Africa’s Daily Maverick reported.

Unlike dogs, cats are really hard to read: Call them by their name and they rarely show any sign of interest or affection.

That doesn’t mean, however, that they don’t understand when their owner calls them, NPR reported.

Scientists in Japan investigated how cats reacted when owners and strangers said four different words and then the feline’s name. This method would help the pets “habituate” with the spoken words and then test whether they could distinguish their names.

Results revealed that the cats responded to their names by turning their heads or ears, suggesting they could identify them.

“We conclude that cats can discriminate the content of human utterances based on phonemic differences,” the researchers wrote. “This is the first experimental evidence showing cats’ ability to understand human verbal utterances.”

It’s still unclear if the animals understand that their name represents their identity but  researchers argue that the name acts as a “salient stimulus” the cat associates with feeding, petting and entertainment.

Other researchers agreed with the premise, saying that felines’ typically aloof behavior doesn’t mean they are individualistic or antisocial.

Cats were never bred like dogs to be obedient and responsive to humans, according to professor Peter Pongracz, who was not involved in the study.

“Most cats fare really well with humans by simply being cute,” he said.

Correction: In Thursday’s WANT TO KNOW section, we incorrectly implied in our “A Shocking End” item that police sought to arrest former Peru President Alan Garcia in connection with an alleged bribe of $100,000 and wrongly stated that he had sought asylum in Uruguay. In fact, Peruvian authorities had ordered Garcia be taken into detention on broader charges of money laundering, influence peddling and collusion, and he had sought asylum in the Uruguayan embassy in Lima. We apologize for the error.