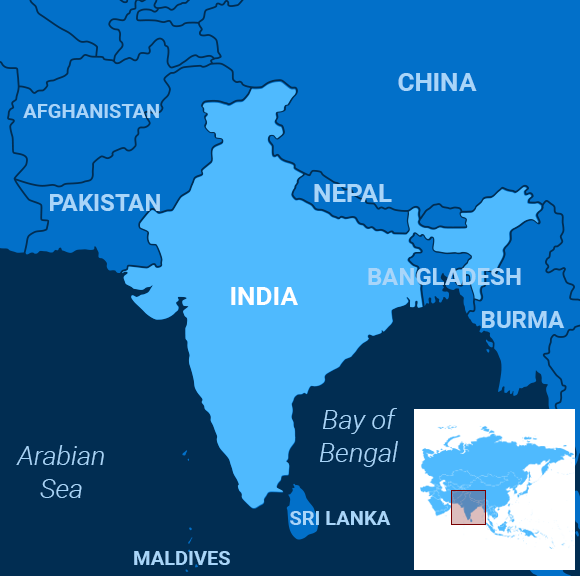 More than 900 million voters are slated to elect 543 lawmakers to the Lok Sabha, the lower house of the Indian parliament, between April 11 and late May.

It is the world’s largest democratic festival, complex, colorful and chaotic.

Prime Minister Narendra Modi and his Hindu nationalist Bharatiya Janata Party (BJP) won office in 2014, achieving an outright majority for the party for the first time. Modi’s legacy is now on the line, the Washington Times reported. And the opposition Congress Party, which controlled India’s government for most of its 70-odd years since independence, is seeking to stage a comeback, wrote Time.

Modi faces challenges. He promised to expand the economy with pro-business policies. Instead, unemployment has surged to a 45-year high. India’s central bank has been cutting interest rates to boost economic growth, the Financial Times noted.

The prime minister has sought to appeal to patriotism amid recent air clashes with Pakistan over the disputed territory of Kashmir. But those clashes arguably highlighted India’s weaknesses in a conflict with its Muslim neighbor. “Why Did India Send Old MiG-21s to Take on Pakistan’s F-16s?” was the headline of a National Interest analysis of the skirmishes.

Devoted Hindus are among the BJP’s core supporters. Modi’s Hindu nationalist policies, however, have left him open to accusations that he doesn’t believe India should be a secular country, as its 1950 constitution stipulates.

On the campaign trail, Modi doesn’t hesitate from labeling the Congress Party as antagonistic to the country’s dominant religion, saying its leaders coined the term “Hindu terror” to scare voters away from the BJP. “Is there any incident of Hindu terrorism?” he said during a campaign rally, according to India Today. “Even the British said Hindus cannot be violent.”

Modi’s campaign is a well-oiled machine, Al Jazeera reported. The prime minister’s social media anti-corruption “I am your watchman” campaign has gone viral, for example, among his 47 million Twitter followers. As the South China Morning Post explained, the campaign was in response to political attacks from Congress Party leader Rahul Gandhi, who had used the phrase “The watchman is a thief” to remind voters about corruption claims against Modi.

Gandhi and his sister, Priyanka Gandhi Vadra, are among the fourth-generation of the Nehru-Gandhi dynasty to seek to rule India. Their family backgrounds garner them enormous respect in some circles. But, despite Modi’s vulnerabilities, polls show that his party will win about 43 percent of the vote while the Congress Party will garner 24 percent, wrote Reuters.

Voters might complain but it’s looking like they are willing to give the “new” guy another chance.

Israeli Prime Minister Benjamin Netanyahu is poised to begin a record fifth term at the helm of the government after his closest challenger conceded defeat Wednesday night.

“We are all democratic, we all accept the decision of the nation,” Benny Gantz, the former army chief who made it a close race, said in his concession speech, CNN reported.

Citing Israeli media, CNN noted that with 97 percent of the ballots counted, Netanyahu’s rightwing Likud party and its allies had secured 65 seats in the 120-member Knesset, while the center-left bloc led by Gantz’s Blue and White party managed only 55.

On their own, Likud and Blue and White each won 35 seats, so it was Netanyahu’s support from two ultra-orthodox religious parties and smaller right-wing groups that made the difference.

Facing indictments for bribery and breach of trust offenses, the prime minister pivoted hard right toward the end of the campaign, promising to annex West Bank settlements if voters granted him a fifth term, for instance.

Britain and the European Union agreed to a “flexible extension” of the Brexit deadline to Oct. 31 to attempt to avoid a chaotic “no deal” exit of the bloc.

British Prime Minister Theresa May said the goal was still to leave the EU as soon as possible, while Irish Taoiseach Leo Varadkar said the UK must now hold European elections in May, or leave on June 1 without a deal, the BBC reported. That will likely increase pressure on May to resign, according to the Washington Post.

On the other hand, European Council president Donald Tusk said after the talks concluded that the extension could be scrapped if the UK were to ratify the exit deal already on the table, or change its mind and “cancel Brexit altogether.”

In the meantime, Britain will continue to pay its dues and abide by EU regulations, while London will be considered a lame duck and thus have little influence in Brussels, the Post noted.

Back to the Polls

Australian Prime Minister Scott Morrison announced May 18 as the date of the country’s next general election, flagging off a campaign likely to be fought over taxes, climate change and inequality.

Morrison has touted his track record of lowering taxes and spurring economic growth. But his conservative coalition is currently in the minority and must win seats in order to remain in government, and polls show the opposition Labor party with a comfortable lead, Reuters reported.

The vote comes as Australia’s economy is showing signs of slowing, following a prolonged property boom. The conservatives promised tax cuts for low- and middle-income earners and record spending on health and education in their pre-election budget last week. But Labor has vowed to match the cuts offered for middle-income Australians and slash taxes further for the poor.

In a short video, Labor party leader Bill Shorten outlined plans to raise wages and invest in healthcare and renewable energy through taxing multinational companies and banks, as well as counterbalance income tax cuts with tighter rules on capital gains.

Whales today resemble giant fish, but over 40 million years ago they looked more like giant otters.

An international team of paleontologists discovered fossil evidence of a four-legged whale in coastal Peru back in 2011, but only recently confirmed existence of the unusual new species.

“This is the first indisputable record of a quadrupedal whale skeleton for the whole Pacific Ocean, probably the oldest for the Americas, and the most complete outside India and Pakistan,” study author Olivier Lambert said in a statement, according to USA Today.

In their study, researchers wrote that the ancient whale was roughly 13 feet long, had hooves on the tips of its fingers and toes, and could live both on land and in water. They dubbed it Peregocetus pacificus, meaning, “the traveling whale that reached the Pacific.”

The team speculated that these early whales came to South America by crossing the southern Atlantic from western Africa – which was a shorter distance then, compared to today – and probably continued migrating northward toward North America after that.

Researchers hope that the new species can reveal more about how whales and other cetaceans, such as dolphins, evolved from hoofed mammals to fishy-looking ones.