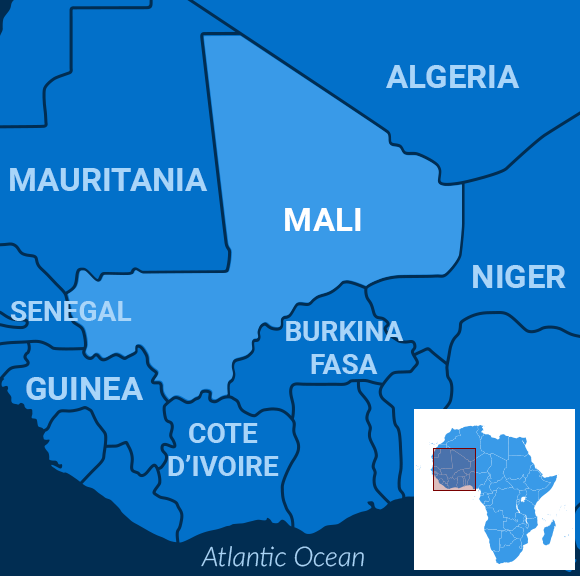 Mali’s ethnic Dogon hunters and semi-nomadic Fulani herders have long clashed over land and water. The recent massacre of more than 150 Fulani villagers – a third of whom were children – was a turning point, however.

Wielding guns and machetes and torching homes, Dogon hunters allegedly raided the village of Ogossagou in the Mopti region to retaliate against jihadist groups that are active in the West African country, the BBC explained. The Dogon claim the Fulani have ties with extremists.

That attack came after an al Qaeda-affiliated group took credit for killing 23 Malian soldiers, reported Reuters. That attack aimed to avenge prior violence against Fulanis.

The cycle of killing stems from the turmoil that has wracked impoverished Mali since 2012, when an insurgency led by another ethnic group, the Tuaregs, rose up in the country’s north. Al Qaeda took advantage of the chaos and gained footholds in the region at the same time.

French troops intervened, saving leaders in Bamako, the capital in the country’s south. But remote central and northern Mali are still dangerous places, as the Ogossagou attack illustrated.

After the massacre, Prime Minister Soumeylou Boubeye Maiga replaced top military leaders and disbanded a Dogon militia, the Dan Nan Ambassagou. “The protection of the population will remain the monopoly of the state,” Maiga told Al Jazeera.

It’s not clear if the militia was responsible for the Ogossagou attack. The militia’s leader told the Associated Press his fighters were not involved. Dogons have taken up arms because government troops can’t protect them, he argued. The Fulani claim the Dogon militias are collaborating with the Malian military.

The United Nations has sent investigators to the area to get the bottom of things.

“These traditional disputes have always been there,” Ravina Shamdasani, a spokesperson for the UN Office of the High Commissioner for Human Rights, said in a press release. “But lately it has taken on a particularly deadly turn because entire Fulani communities – and we are talking about millions of people – are being painted as violent extremists simply because they are Muslim.”

Mali is overwhelmingly Muslim but the Dogon adhere to traditional African religions while also following Islam.

Gen. Francois Lecointre, who leads the French military, said the bloodshed shows how anti-government forces are backed into a corner, according to Agence France-Presse.

CNN disagreed, writing that the violence in Mali was spiraling out of control. Around 200 civilians died in the Mopti region last year, Human Rights Watch found. This year is headed to be worse.

Hopefully Maiga’s measures will help. But, with instability so deep-rooted, it’s doubtful.

British lawmakers on Monday rejected four alternatives to the unpopular divorce deal proposed by Prime Minister Theresa May, refusing schemes that would have softened or even called a halt to Brexit.

Only 12 days remain for Britain to come up with a new plan to avoid a chaotic “no deal” exit of the European Union, the Associated Press reported. That means May’s government can try to push her deal through parliament again, risk crashing out of the EU without a deal in place, or call snap polls and try to break the deadlock through a fresh election.

Notably, it was an alternative plan for a softer Brexit that came closest to passing. Rejected by a margin of just 276 to 273, that plan would have kept Britain in a customs union with the EU, guaranteeing smooth and tariff-free trade in goods.

Other alternatives proposed Britain could remain in the common market for both goods and services, requiring a public referendum for any deal Britain reaches with the and setting up a “pull the plug” scheme that would cancel Brexit if no deal could be reached within two days of the deadline.

Ukrainian comedian-turned-presidential candidate Volodymyr Zelenskiy trounced the incumbent president in Sunday’s initial round of voting, putting the 41-year-old outsider in a strong position to win the runoff vote three weeks from now.

“A new life begins,” Zelenskiy said after the polls, according to the Associated Press. “A life without corruption and without bribes. A life in a nation of dreams comes true.”

While he joins a plethora of political outsiders gaining influence – and often power – in Europe, Zelenskiy is much more moderate than the far-right populists who have been gaining ground across the region. Rather than strident nationalist rhetoric, for instance, he has appealed for reconciliation with separatist-held eastern Ukraine.

His campaign persona looked a lot like the character he played on TV in “Servant of the People” — a schoolteacher who becomes president after a student’s video of him blasting official corruption goes viral. Even so, Zelenskiy has not yet outlined a political program.

Japan announced that the new imperial era set to begin May 1 would be called “Reiwa.”

The new era will begin with the abdication of Emperor Akihito, the BBC reported. The new name signifies order and harmony and marks the first time that the name of an emperor’s reign, or “genjo,” has been taken from an old anthology of Japanese poems, the Manyoshu, instead of a Chinese one, Prime Minister Shinzo Abe explained in an address to the nation.

The Manyoshu symbolizes Japan’s “profound public culture and long tradition,” Abe said, noting that despite the many changes the country is undergoing “there are lots of Japanese values that shouldn’t fade away.”

When 85-year-old Akihito steps down later this month and turns over the throne to his son, Crown Prince Naruhito, he will be the first Japanese emperor to do so in more than two centuries. But even in ordinary circumstances “genjo” have great importance for Japanese society – becoming a sort of mission statement that appears on coins, newspapers, driving licenses and official paperwork.

It’s a case of what came first: the chicken or the egg?

Anthropologists are now asking whether belief in big gods – who watch and judge people – created large societies, or if the opposite occurred.

A new study suggested that larger, moralizing deities are a consequence, not a cause, of complex societies, the Economist reported.

The study team’s researchers built a historical database – dubbed Seshat after an Egyptian goddess of knowledge – with data on over 400 societies that have existed during the past 10,000 years.

The database divided the globe arbitrarily into 30 regions, with 12 areas providing data of complex societies before and after the emergence of big gods.

The team noted that in 10 of these 12 regions, larger deities appeared about 100 years after a society grew in number and increased in complexity.

“In almost every world region for which we have data, moralizing gods tended to follow, not precede, increases in social complexity,” said lead author Harvey Whitehouse in a statement.

The researchers also observed that frequent and collective religious rituals – such as daily food offerings to gods – unified communities further and helped create a common identity.

Looks like it took the presence of a supernatural policeman to keep people in line back then.