Giving Thanks – Around the World

Thanksgiving is arguably the most American of holidays.

Originating in the devout Christian culture of early 17th century New England, Thanksgiving is secular. It’s also diverse and open – following in the spirit of Pilgrims breaking bread with the Native Americans: It’s welcoming of family, friends, colleagues, neighbors and even strangers.

Still, the whole point is to pause for a moment and reflect on one’s blessings, while reveling in them.

And in that, we are not alone: Thanksgiving is only one among many days of thanks worldwide, some religious, some quirky, most delectable. We bring you a sampling of how others celebrate their bounty, as we sit down to give thanks for our own. 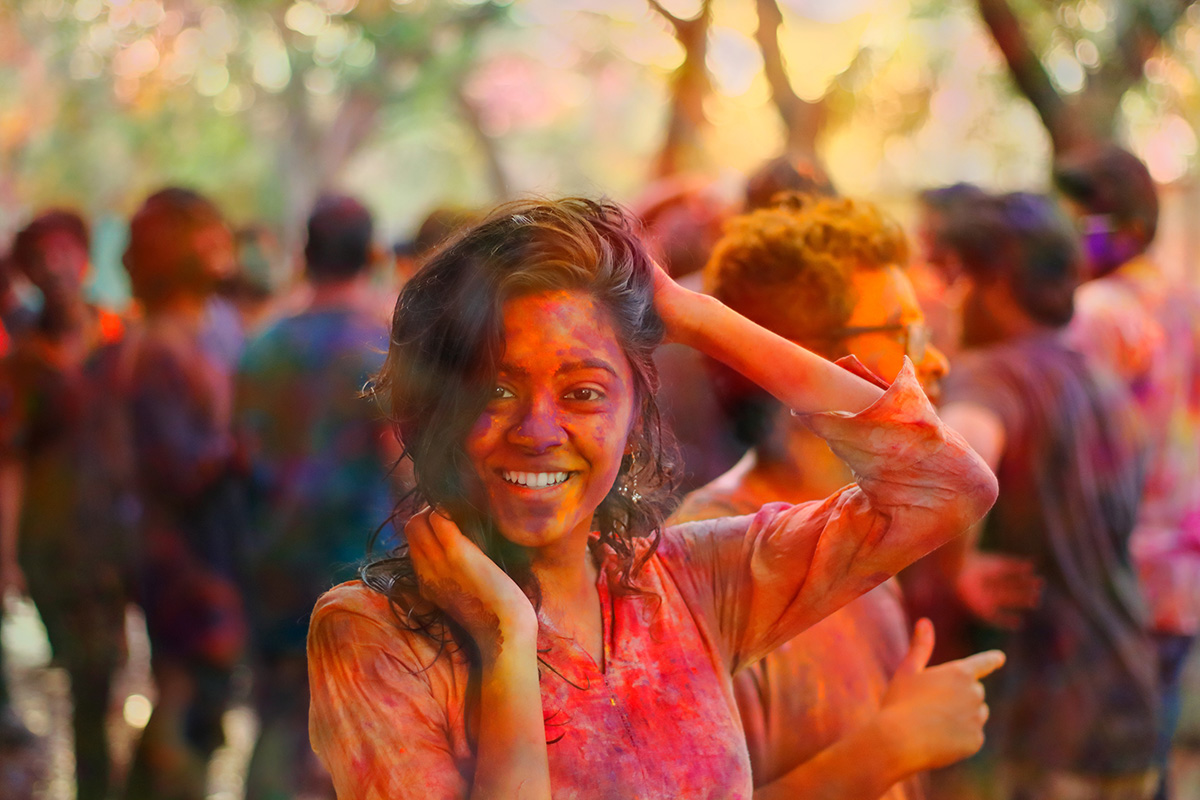 A girl in Hyderabad, India, is caught up in the color bombs that mark the Holi festival. Photo by Shubham Sharma

Starting at the end of February, Argentina celebrates its grape harvest in Vendimia with the Archbishop of Mendoza blessing the grapes before everyone has a tipple (or two). In neighboring Brazil, some sit down to give thanks and eat turkey the same day Americans do – a Brazilian ambassador to the US liked the tradition so much, he imported it, albeit with a local twist: A church service in the morning and a Carnival at the end.

Then comes Brazilian Black Friday – a day many countries have gleefully adopted.

To the north, Canadians have already finished their turkey leftovers by the time Americans start thinking about stuffing. Canadian Thanksgiving, in October, dates to 1578 when explorer Martin Frobisher sailed his convoy from England looking for the Northwest Passage. Surviving harsh storms, they gave thanks for their deliverance.

The Grenadians also celebrate a US-style Thanksgiving in October – in honor of the 1983 “liberation” of the Caribbean island by the US.

And in Barbados, giving thanks for the sugar cane crop, once the economic mainstay of the island, was long a tradition in the wild party known as Crop Over. And even though sugar cane production is no longer important, the party must go on – with Calypso and crazy costumes.

African gratitude festivals often involve surviving famine and war. For example, the Ga people of Ghana celebrate Homowo (literally jeer at hunger) in May to honor the end of a long-ago period of drought and famine and themselves for surviving it. Meanwhile, in northwestern Nigeria, Argungu celebrates the end of hostilities between two kingdoms in 1934 and ends in thousands jumping into a river with one hour to catch the largest fish using traditional methods.

In Swaziland, locals sing and dance during the Incwala Festival: On Day 4, the king tastes the first fruits of the new harvest before throwing a sacred gourd to a lucky young man. Meanwhile,  the Ngoni people of Zambia celebrate the first harvest of the year and the entrance of their people into Zambia in 1835 in N’cwala with a warrior dance competition in February.

And in Liberia, locals have celebrated Thanksgiving with mashed cassavas, green bean casserole and roasted chicken spiced with peppers on the first Thursday in November since 1820 when freed American slaves began colonization.

The northern Italian city of Alba loves its white truffles and celebrates their harvest in a fall festival with truffle-studded everything, truffle hunts and donkey races, too. In Olivagando in Magione, locals mark the olive harvest in November with a feast in a medieval dinner in the town’s 12th-century castle.

In Madeira, April’s flower harvest festival sees the island’s children creating the colorful Muro da Esperança (Wall of Hope) with flowers, as flower carpets grace the streets of Funchal. And in Lithuania, locals celebrate Nubaigai, the “Festival of the Old Woman” in October with a scarecrow resembling an elderly woman and songs of a bison that tried to eat the wheat crop before ultimately being defeated by the people.

Since 1810, Bavarians have donned lederhosen and dirndls to celebrate Oktoberfest in Munich and elsewhere in southern Germany. Meanwhile, across the country, many mark Erntedankfest (harvest festival of thanks), more religious than beer-soaked. And then there are the gourds: In the Ludwigsburg Pumpkin Festival, locals take to the water in a regatta involving canoes made out of giant pumpkins.

Meanwhile, the industrious Dutch have two days (Dankdag voor Gewas en Arbeid) to be thankful for “crops” and “work”: The first involves prayer for the future bounty and the second, gratitude for it. Meanwhile, some in Leiden celebrate that they were involved in the first American thanksgiving: About 40 percent of the Pilgrims were here.

Sukkot marks the end of the harvest in Israel. Recalling their people’s tribulations in the desert – and their escape therefrom – locals build temporary shelters and eat and sleep in them.

It’s all about the moon in China: The 400-year old Mid-Autumn Festival coincides with the first full moon of the season involves eating moon cakes and gazing at the moon. In the 14th century, Chinese rebels used mooncakes to distribute secret messages to undermine the Mongolian empire.

Indians celebrate Holi which dates back to the fourth century by singing and dancing around a bonfire and then having a fight: In the Carnival of Colors, everyone tries to paint everyone else with colors via squirt guns and water balloons. Meanwhile, the Iranian harvest festival, Mehregan, dates back to ancient Persia: Locals wear purple clothes, apply eye-liner for luck, drink special drinks from fruit and flowers, and throw handfuls of sugar plums, lotus seeds and wild marjoram over each other’s heads as they embrace.

In Japan, things become more somber in the Labor Thanksgiving Day which originates from the sixth century BCE. These days, in November, the Japanese honor labor and the fruits of it (production) and thank each other while children draw pictures and gift them to police stations.

Asia’s main staple, rice, gets its share of attention: In Bali, the rice harvest festival honors the goddess of the staple grain, Dewi Sri, while in Malaysia (and also Borneo), Kaamatan has six distinct ceremonies honoring the rice harvest. Koreans celebrate, too, in Chuseok, with much sampling of rice cakes and rice wine. And while most honor the grain, Vietnam’s Tet Trung Thu Festival (Festival of the Children) celebrates the ‘latchkey kids’ left at home while the parents work in the rice paddies.

Fruit in Asia comes in crazy shapes and colors (to the Western eye). Chanthaburi in Thailand celebrates these durians, rambutans, longans, and mangosteens in the summer with parade floats made from fruit. And not to be outdone, Turkmenistan’s ego-in-chief, President Saparmurat “Turkmenbashi” Niyazov, created a festival in 1994 to honor the cherished Turkmenbashi melon, his fruity namesake.

In Australia, it’s all about the tipple: Dating back to 1954, the Stanthorpe festival in March celebrates wine and holds a celebrity grape crush. Meanwhile, in Tasmania, locals honor the hop harvest with beer and hop brownies.

Thanksgiving on Norfolk Island was imported by American whaling ships: These days, the tradition is to tie corn stalks to the pews and flowers to the altar on the last Wednesday of November.

Defeating the wilderness and overcoming hardships, respecting and harnessing nature, affirming not just family but community and, of course, expressing gratitude unite all of these holidays.

The lesson is clear: There are many ways to give thanks.

Before refrigerated trucks and superhighways, turkey farmers had it tough.

To move their birds to market, farmers would march their flocks, like condemned men, to the nearest slaughterhouse, a journey known as the “turkey drive,” the Washington Post reported.

The treks were similar to cattle drives but without cowboys or the threat of stampedes. Challenges included keeping the fluffy birds from wandering off or falling prey to coyotes and poachers.

Farmers threw feed on the ground to keep the turkeys moving and fat.

Turkey drives are documented as far back as 17th century England, where farmers in East Anglia would walk their birds all the way to London.

In the US, Vermont farmers would march their flocks as far away as Boston in the autumn.

In the early 20th century, the townspeople of Cuero, Texas, turned their turkey march into a tourist attraction dubbed the Turkey Trot, after a dance craze of the period. It attracted 30,000 visitors, including the Texas governor.

Cuero’s tradition fizzled out in the 1970s, a victim of industrialization and the popularity of the abnormally large broad-breasted white turkey. The bird is too top-heavy to trot.